Is Britain a Christian Nation?

In the United States, we’re used to hearing republican politicians claim that America is a “Christian nation”. Sarah Palin certainly said so:

What we’re not used to hearing is a British Prime Minister saying the same of the United Kingdom.  Current PM David Cameron has done just that.  Is his argument any good? Let’s look at it.

This point has been controversial. A group of prominent British humanists wrote an open letter to the Daily Telegraph challenging Cameron on the point. They said:

[Cameron’s claim] fosters alienation and division in our society. Although it is right to recognise the contribution made by many Christians to social action, it is wrong to try to exceptionalise their contribution when it is equalled by British people of different beliefs. This needlessly fuels enervating sectarian debates…

Cameron refused to back down, responding in an op-ed for the Church Times today:

…being more confident about our status as a Christian country does not somehow involve doing down other faiths or passing judgement on those with no faith at all. Many people tell me it is easier to be Jewish or Muslim in Britain than in a secular country precisely because the tolerance that Christianity demands of our society provides greater space for other religious faiths, too.

Crucially, the Christian values of responsibility, hard work, charity, compassion, humility, and love are shared by people of every faith and none–and we should be confident in standing up to defend them.

To evaluate these arguments, we need a clear standard by which to judge whether or not a nation or country is “Christian” as opposed to something else. There are many wide-ranging standards we could appeal to. In order, from strongest to weakest, are the conceptions I come up with off the top of my head:

Since many of these conceptions rely on Christianity being a popular self-identity, let’s see what the numbers show. The British Social Attitudes survey has taken annual data on the question of religious affiliation in Britain for 30 years. Here are its findings: 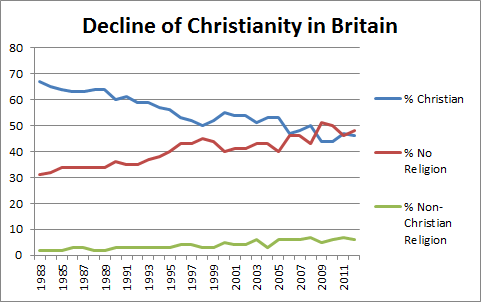 Britain has not met the universalist standard nor either of the overwhelming preponderance standards during the survey period. It met the majoritarianism standard until 2006, recaptured it briefly in 2008, and has not met it since. It met the first past the post standard until 2009, regained it in 2011, and lost it again in 2012. This means that Britain can only meaningfully qualify as a Christian nation in a consistent way on the historicist and establishmentarianist standards. The establishmentarianist standard is hardly worth considering further–Christianity’s de jure status as the state religion is not reflected in the de facto attitudes of British citizens. It is largely a vestigial structure. The Church of England has no meaningful direct impact on British state policy and vice versa.

The current Archbishop of Canterbury, Justin Welby, appealed to the historicist standard when he weighed in on the debate:

It is clear that, in the general sense of being founded in Christian faith, this is a Christian country. It is certainly not in terms of regular churchgoing, although altogether, across different denominations, some millions attend church services each week. Others of different backgrounds have also positively shaped our common heritage. But the language of what we are, what we care for and how we act is earthed in Christianity, and would remain so for many years even if the number of believers dropped out of sight…

This is a vague, cultural claim. It is hard to conclusively prove or disprove. There are two arguments against it that have real force:

Back in November, I discussed the extent to which capitalism has displaced Christianity as the foundational belief system in western societies. Along many axes, capitalism is the antithesis of Christianity:

Capitalism (along with the rest of the ideas of the enlightenment period) was generated by a mix of deists, humanists, agnostics, outright atheists, and other non-Christians, many of whom were British, as Britain was the first country to industrialize. While those founders of the capitalist ideology were themselves born into a Christian society, it is hard to see where precisely the intellectual continuity is. The Archbishop might claim that the continuity lies with the left, which has frequently agitated for social welfare policies to mitigate the destabilizing effects of the market economy. But this leftist reaction came originally not from Christians, but from the Marxists, who believed that religion was an “opiate of the people”. Even the pre-Marx reformers were generally hostile to the old religion, which they associated with feudalism and with domination by a rentier class (e.g. Auguste Comte, Saint-Simon, etc.). Because Christianity emphasized being materially content, it was incompatible with the intense emphasis these reformers wished to place on material progress. The drive for wealth, territory, technology, and social transcendence was not reflected in the Christian attitudes that prevailed during the middle ages and early modern period.

In recent centuries, Christianity has changed radically to bring itself more in line with capitalist doctrine, but this, if anything, proves our point–that capitalism has become foundational and that it now determines the nature of Christianity rather than the other way around.

But let’s say the reader finds all of that unpersuasive and remains convinced that modern society is as Christian at its core as the European societies were during the middle ages, renaissance, and early modern period. What then? It certainly cannot be denied that Christianity has played a role in shaping the kind of society that we have. Even if the former is true, Christianity gave the early capitalists an ethos against which to react. On this charitable reading of the history, it would still be wrong to call Britain (or the United States even, for that matter) a “Christian nation”. Why? Because this is extremely reductive–many ideas have played significant roles in determining the kind of society we have. Christianity may have played a role, it may even have played one of the biggest roles, but it does not possess a monopoly. Jesus could not have been killed and Christianity could not have had the influence it has if not for the intellectual context into which Jesus was born.

I wrote about this back in July. Jesus’ life and Christianity as we know it today result from the coming together of two independent non-Christian ideologies, Judaism and Roman statism. Roman statism itself descends from Greek philosophy, from interactions among the Roman, Etruscan, Greek, and Carthaginian cultures. To say that Britain is a Christian nation because all of the ideas we currently operate under were influenced by Christianity is no more meaningful than to say that we live in a Roman nation, or a Jewish one, because Christianity was produced by these ideas. Indeed, it makes just about as much sense to say that we live in a Carthaginian nation, for if the Romans had not learned how to build ships from the Carthaginians and defeated them in the Punic Wars, they could not have conquered Judea and executed Jesus.

The only reason to engage in calling a nation or country “Christian” or “Jewish” or “Roman” or “Carthaginian” or “humanist” or whatever term we pick is to mark out the individuals who self-identify with that term and allow them to feel as though they are more part of the nation than everyone else, that the nation prioritizes them and their worldview. Barack Obama made a similar point many years ago, before he became president:

When a politician like David Cameron or Sarah Palin calls a nation or country “Christian”, the message sent out is clear–this state privileges Christian citizens and Christian beliefs over the beliefs of other kinds of people. This generally just isn’t true–both Britain and the United States put secular capitalism ahead of Christianity whenever the two conflict in any meaningful way. But even though it’s not true, when politicians say it is, they make non-Christian citizens feel as though the state doesn’t care as much about them as it does about Christians. This makes them feel that the state does not have equal concern for their interests, which alienates them from the state and makes them feel as though their interests are not part of the state’s project. It needlessly harms them.

The only benefit conferred on anyone by talk of a “Christian nation” is the reassurance that some Christians get that the state still privileges their views. This is a false assurance–the state has long since decided to place capitalism in the driver’s seat. This is not to say that Cameron and Palin are deliberately lying, but that their words delude their fellow citizens and themselves into believing they are part of a kind of society that has not existed since industrialization. If these citizens really want to live in a Christian nation, in a nation that places the immortal and immaterial soul ahead of material gain and condemns the usurer for his materialism and his greed, they need to radically undo the policies of the last 300 years. That is not forthcoming, because even those who self-identify as Christians in this day and age are more capitalist than they are Christian in the sense in which Jesus would have understood it. On some level, they know this–a full 76% of American republicans believe that if Jesus suddenly came back to earth today, he would disapprove of modern Christianity. This is not to say that we necessarily shouldn’t be capitalist, or that Christians should be traditionalist, it is merely to say that capitalism and traditional Christianity contradict each other and cannot in good conscious be held together. To call a nation that practices the former an example of the latter is a contradiction in terms. The former Archbishop of Canterbury, Rowan Williams, has just now, as I have been writing this piece, called Britain a “post-Christian” nation. That’s a much fairer description, wouldn’t you say?

3 Comments to “Is Britain a Christian Nation?”