In the course of doing my MA at the University of Chicago, I’ve had the opportunity to take a class from John Mearsheimer. Mearsheimer is one of the most widely renowned structural realists in the international relations game today. He disagrees with much of US foreign policy since the end of the Cold War, lamenting the US’s decision to expend its energies maintaining large military presences in regions of the world that contain no threats to the United States. Mearsheimer calls for a strategy of offshore balancing, in which the United States only intervenes in critical regions in order to prevent those regions from being dominated completely by another state. Otherwise, he recommends the US save its strength. I found myself curious today about what many of the world’s region’s power relationships might look like if the United States were to withdraw militarily and allow the powers in those regions to engage in security competition with one another, and I have taken some time to run the figures and make a vast plethora of charts to share with you.

Mearsheimer thinks that there are several regions of the world that are of substantive importance to the United States:

He believes that the United States should almost never intervene outside of these regions and that it should intervene in the last three only when there is a potential rival hegemon in those regions. The western hemisphere is America’s home region, and consequently the United States has to ensure it remains dominant in this area, but, on Mearsheimer’s view, it can leave the other regions to handle themselves. What I have done is taken the GNP figures of the major states in each of these regions (and a couple others–I was having fun) and created pie charts showing the relative shares of wealth those states enjoy on the theory that GNP is a fairly good indicator of latent power. Latent power consists of a state’s economic leverage and potential resources available for military spending. It is by no means a perfect indicator, but it is the one that Mearsheimer himself uses in his benchmark Tragedy of Great Power Politics when he compares the capacities of various states. To provide some context for what share of wealth that might be sufficient to attempt to establish hegemony in a region, Mearsheimer claims that Wilhelmine Germany had 40% of European wealth (excluding the US) in 1913 and Nazi Germany had 36% (excluding the US) in 1940.

Let’s start with Europe. Here’s what Europe looks like with the US maintaining a pacifying presence in the region:

America’s share is roughly the same size relative to the European powers that it was at the dawn of World War II. The primary difference is that wealth is much more evenly distributed among the European states than it was in 1941. Indeed, if the US were to pack up and go home, it doesn’t appear that any European state would be in a clear position to seek hegemony:

Germany, which is nearest to being competitive for the crown, has a share about as large as the one it possessed in 1890, a couple decades before it was a serious threat to dominate the continent. It’s unlikely however that Germany’s share of relative wealth will increase further because Germany’s population is shrinking in size while France’s and Britain’s are growing.  In addition, Britain, France, and Russia all possess nuclear weapons and have a terrific deterrent against German aggression. What about East Asia? Here’s what it looks like with the US inside:

The United States’ grip on East Asia is comparatively weaker than its grip on Europe, hence the recent US talk of a “pivot to Asia” in which the US shifts focus (and troop deployments) from Europe to Asia. The picture is also more troubling when you take the US out, due to the relative prominence of China: 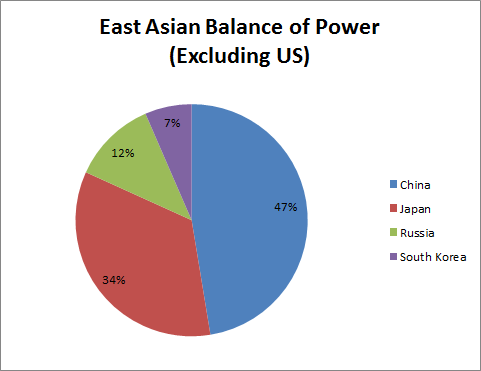 Without the United States, China is as much stronger than the rest of East Asia as the United States is when it’s in. Granted, when Mearsheimer called for troop withdrawal from East Asia in the early 90’s, China was vastly weaker than it is now. Nevertheless, there is a much stronger case for a continued US presence in East Asia than there is in Europe if the goal is preventing regional hegemony, especially when we consider that unlike Germany, China’s relative power is likely to continue to increase. Its population is still slowly creeping upward while Japan’s is falling and Russia’s has just recently pulled stagnant after shrinking for almost 20 years. Plus, while China and Russia have nuclear weapons, Japan and South Korea do not. That said, the picture looks a little better if we consider the possibility that even without a US presence, Japan, Russia, and South Korea might attempt to contain an aggressive China by making common cause with the nations on China’s southern borders:

This would give China about as much relative wealth as Germany before World War I, a war that Germany narrowly lost. India has nuclear weapons, so a total Chinese victory would be impossible, but nonetheless, it’s reasonably likely that the United States would worry that the Japanese-led balancing coalition would fail and feel compelled to intervene to contain China, so the case for maintaining a presence in East Asia remains reasonably robust.

What about the Persian Gulf? The United States is Godzilla in the gulf:

American power in the gulf is so great that I question if even a united gulf state could really pose a threat to American interests. Nevertheless, when you take the United States out, it’s unclear that such a united state would emerge: 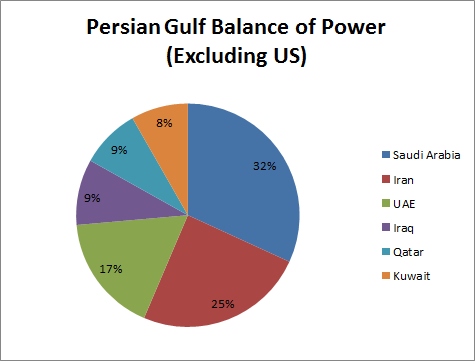 Yes, Saudi Arabia’s piece of the wealth pie is quite large (though not as large as Germany’s before either World War), but Saudi Arabia suffers from a critical manpower shortage in comparison with its nearest peer competitor on wealth, Iran:

This suggests that Iran would likely fair better in a conflict with Saudi Arabia than the raw wealth figures suggest purely due to its ability to field a larger army. Indeed, depending on how influential we think raw numbers are, we might say that Iran is the more likely would-be hegemon than Saudi Arabia. But in any case, US wealth completely outclasses Iranian wealth such that any serious effort by Iran to gain hegemony in the gulf could be easily countered without the United States going to much effort. My thinking here was indeed tested during the Iran-Iraq War, in which the US gave military aid to Iraq to prevent Iran from seizing its oil fields. The US was able to counter Iran’s advantage in manpower and wealth without even deploying forces of its own to the region. I see little reason to think that US military bases in the gulf are necessary, and Mearsheimer is right when he suggests that the US could resume the strategy it used during the 80’s and station what military forces it reserves for this region offshore. What about nuclear weapons? At present, none of these countries have them, though Iran may be pursuing them. If Iran were to get nuclear weapons, Saudi Arabia would likely pursue them and the two states would both face the logic of mutually assured destruction.

So these charts suggest that Mearsheimer’s view was quite reasonable in the early 90’s and, with the exception of East Asia, remains quite reasonable now. Were the United States to withdraw from Europe and the Persian Gulf, existing balances of power in those regions are sufficiently well-balanced to prevent the rise of a potential hegemon and, for the most part, keep the peace.

But out of curiosity, let’s take this a step further and imagine a radical isolationist policy for the United States in which it does not even bother to watch over South America. The US has not pursued any policies like this since well into the 19th century, but let’s give it a look, just for grins. Here’s South America with the United States engaged:

The US does indeed remain Godzilla in its backyard. What happens if the US goes full Ron Paul? This:

Brazil goes on the march, and before long the entire continent is speaking Portuguese and hailing Dilma Rousseff as the new Latin American Caesar. Since none of these countries has nuclear weapons, Brazil could conquer the continent like it’s 1939. No, I’m afraid the United States needs to remain engaged in the affairs of its own hemisphere.

If the US leaves the region and reduces military and economic aid to Israel, the Israelis find themselves in quite hostile territory:

While there’s no potential hegemon, Israel only controls 8% of regional wealth (on par with Austria-Hungary on the eve of World War I). While Israel has nuclear weapons, Israel fears that Iran will get them and neutralize that advantage, driving Saudi Arabia and Turkey to get them (and further reducing the value of Israel’s stockpile). While Israel’s nuclear arsenal nonetheless protects it from immediate invasion, Israel also has reason to worry about the demographic situation–its population is quite small: 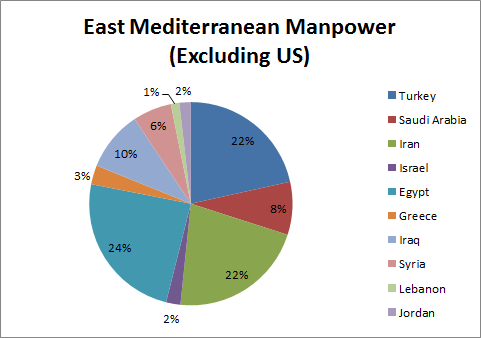 At only 2%, Israel’s conventional dominance depends on maintaining a substantial advantage in military technology and organization. For these reasons, it seeks to tether the United States to it and keep it mired in the Eastern Mediterranean despite that region’s lack of immediate relevance to US interests.

In sum, the United States could freely abandon its military bases in:

But it should maintain a significant presence in: