The Return of Rick Perry

Texas governor Rick Perry has decided not to run for another term as governor, and that has many on the right excited about a possible 2016 presidential campaign. Perry is thought to be a good primary candidate due to his social conservatism (he has recently called a special session of the Texas legislature in an attempt to once again pass the anti-abortion legislation filibustered so recently by Wendy Davis). He is still thought to make a good general election candidate due to his state’s comparative economic performance. Texas has  posted unusually low unemployment numbers relative to the rest of the country during his stint as governor. So today I’d like to consider the question of whether or not Rick Perry makes a suitable republican candidate for US president.

Texas has indeed posted lower unemployment numbers than the rest of the country since the recession. This Perry terms the “Texas Miracle”:

Notice California in the red? Its numbers have been worse than the national average. Perry argues that this is because of differences in policy between Texas and California. In Texas, there is no state income tax, regulations are loose, the state minimum wage is lower, cost of living is lower, average wages are lower, and so on down the line. By contrast, California has the inverse of all of that–it has a state income tax, tighter regulations, a higher minimum wage, higher cost of living, higher average wages, you get the picture.

Perry argues that Texas beats California because California is a high-tax, high-regulation state and Texas is not. The figures do indeed show that Texas has lower tax rates and does boast a lower unemployment rate.

That said, it should also be noted that California was much more adversely affected by the housing crisis, while Texas emerged relatively unscathed. How can we find out how big a role taxes really play here?

Well, if low taxes really are what makes the difference, we should expect to see all states with low taxes doing well, not just states that were spared the brunt of the housing crisis.  We need to look not just at Texas and California, but at groups of states that share their tax policies. So let’s figure out which states have higher taxes and which have lower ones:

That was easy. Now let’s see if there’s any relationship between the tax burden and the current unemployment rates in the various states. This requires a little bit of original research: 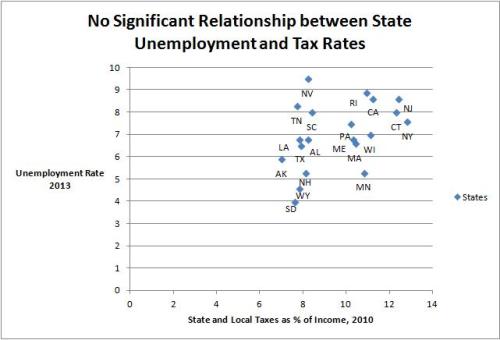 Unemployment is slightly higher in the high tax group (7.5% on average compared with 6.6% in the low tax group), but not much higher, and there are very poor performing low tax states (Nevada) and very good performances from low tax states (Minnesota). Both groups are outperforming the national average (7.6%). The way a given state got smacked by the recession seems to be of stronger influence–both Nevada and California were gobsmacked regardless of their tax rates due to the housing crash, while both Minnesota and South Dakota did just fine regardless. While we’re here, I also thought I’d investigate to see if taxes were related to higher per capita GDP:

We don’t get a particularly strong relationship here either, but it is stronger than the tax/unemployment relationship, particularly if Alaska and Wyoming are disregarded–these states have very low population densities but lots of mineral wealth, so the wealth produced there is not distributed over nearly so many people.

In sum, Perry’s model looks good when you compare Texas to California, but put it in a wider context and it begins to look very muddled. The states with economic policies most similar to Perry’s have only a slight unemployment advantage, and the workers in them are themselves poorer, enjoying smaller proportional slices of the national GDP.

But let’s say that all we really cared about was unemployment. Wouldn’t the extra point lower that the low tax states do indeed manage to demonstrate be nonetheless worthwhile? Sure, except I have a strong suspicion about where that point comes from.

Isn’t it reasonably likely that if you have a state with low taxes nearby a state with high taxes, that businesses might decide to relocate from the high tax state to the low tax state? Might low taxes in Texas not merely reduce Texan unemployment, but contribute to unemployment in say, California? The difference in average unemployment rates between the two groups is meager enough that I hypothesize that this could account for the entirety of the difference. If I’m right, Perry’s policies have only served to relocate jobs from rich, high-wage states to comparatively poorer, lower-paying ones. To the extent that the Texan recovery has been stronger as a result of Perry’s policies, it has been at the expense of the recoveries in other states like California.

Furthermore, how could such a policy be applied nationally to any effect? Individual states can lower taxes and wages in order to attract businesses from neighboring states, but the country as a whole cannot do that. If Californian taxes and wages were just as low as Texas’, Texas’ taxes and wages would not afford it any competitive advantage against California. The effect would be merely to lower living standards and the quality of public services in both states. One might imagine that it could be possible to do this internationally–lower US costs relative to costs in other countries, pilfering jobs from say, China–but Americans are not willing to accept Chinese wages and Chinese living standards. It was that unwillingness that caused us to adopt the various policies that constituted our modern welfare state in the first place.

Perry’s economic policies would be unsuitable, at least at the national level, and I suspect Texans are putting up with poorer public services as a result of them. In any case, the Texan GDP remains unimpressive. In the meantime, he is also stuck defending the losing team in the culture war–American public opinion has tended to turn against the republicans on immigration, homosexuality, and so on. Republicans are increasingly seen as old, racist, sexist, religious fanatics. Rick Perry reinforces that image; he does not repair it.

Is Rick Perry likely to win a presidential election in 2016, when country is younger, browner, and less religious (all of which it is demographically expected to be)? I very much doubt it. But if recent republican selections prove any guide, that may be his best guarantee of receiving the nomination.

5 Comments to “The Return of Rick Perry”