The other day, there was a terrorist attack in Woolwich, London. Lee Rigby, a drummer in the army, was attacked and stabbed by two assailants. This has brought up the subjection of the relationship between Islam and terrorism. It has also raised the question of whether or not permitting Muslim immigration leads to terrorism. Today, I’ve decided to weigh in on the whole mess.

It’s understandable that this is a topic of discussion, considering that one of the assailants made the following statement in defence of his actions:

The only reason we have killed this man today is because Muslims are dying daily by British soldiers, and this British soldier is one, is a eye for an eye and a tooth for a tooth. By Allah, we swear by the Almighty Allah we will never stop fighting you until you leave us alone. So what if we want to live by the Sharia in Muslim lands? Why does that mean you must follow us and chase us and call us extremists and kill us? Rather you lot are extreme. You are the ones. When you drop a bomb, do you think it hits one person or rather your bomb wipes out a whole family. This is the reality. By Allah, if I saw your mother today with a buggy I would help her up the stairs. This is my nature. But we are forced by the Qur’an in Sura at-Tawba [Chapter 9 of the Qur’an], through many, many ayah [verses] throughout the Qur’an that [say] we must fight them as they fight us, a eye for a eye and a tooth for a tooth. I apologise that women had to witness this today, but in our land our women have to see the same. You people will never be safe. Remove your governments. They don’t care about you. Do you think David Cameron is gonna get caught in the street when we start busting our guns? Do you think the politicians are going to die? No it’s going to be the average guy, like you, and your children. So get rid of them. Tell them to bring our troops back so we ca.., so you can all live in peace. Leave our lands and you will live in peace. That’s all I have to say. Allah’s peace and blessings be upon Muhammad.

The assailant is referencing the Islamic concept of “qisas” or “equal retaliation”, though the idea does not originate with Islam–it is also present in the Torah and in Hammurabi’s original law code. However, it is very arguable that the assailant has misinterpreted the text. If we look, for instance at Quran verse 42:40, we find this:

And the retribution for an evil act is an evil one like it, but whoever pardons and makes reconciliation – his reward is [due] from Allah . Indeed, He does not like wrongdoers.

An eye for an eye only ends up making the whole world blind.

By permitting retaliation even as it refuses to promote it, the Quran opens the door to some very nasty behaviours. Many Muslims are nonetheless not terrorists, despite feeling wronged by the actions of western countries. Some of them refuse to pursue retaliation because they believe forgiveness is more godly, others because they believe that terrorism targets the wrong people–it targets civilians rather than the individuals who have done wrong to Muslims specifically. Terrorists circumvent the latter argument by claiming that all the citizens of western states contribute via taxes, the vote, and passive acquiescence to the abuse of Muslims by their governments, or they argue that the retaliation is against the western community rather than specific people. This leaves them in the position of pursuing a policy that Islam permits but does not endorse.

I agree that the distinction between civilians and combatants where civilians are contributors to the economy that sustains the combatants is an arbitrary one. For this reason, in wars that are a matter of life or death for states, industry, farms, and population centres are often bombed or otherwise targeted. If you can destroy a society’s capacity or willingness to field its military against you, you can defeat that society without ever engaging directly with its military forces. It is unreasonable to say that western citizens are not connected to western policies abroad–we fund those policies, we vote for those policies, we do not do everything in our power to obstruct those policies.

This means it is important that the principle of retaliation be repudiated altogether. In this situation, terrorist attacks on westerners are unsuccessful in preventing the western economy from continuing to fuel its military forces. They are counter-productive insofar as they cause westerners to be more anti-Islamic and more militaristic. The assailant’s belief that his attack would cause British people to oppose British foreign policy in the Middle East is grievously mistaken; his attack will only lead to the death and mistreatment of more Muslims. This attack can only be justified if one believes in revenge for its own sake. Revenge is the process by which we harm other people purely because we have been harmed for self-gratification. Typically, the harm we inflict in revenge is much greater than is our ability to ameliorate our own suffering through it. Killing someone because they killed your wife does not bring your wife back, and it causes a lot more misery to that person than it spars you. For this reason, revenge is generally not socially utile and should generally be rejected.

Do Muslims reject revenge as much as non-Muslims do? To try to shed some light on the question, I ran some data comparing the incidence of terrorism in different western countries to the portion of the population that is Muslim. Here’s what I got: 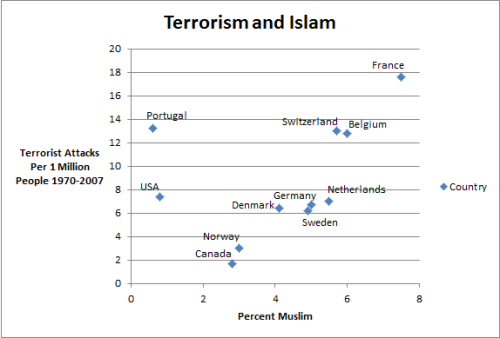 I got my terrorism data from the Global Terrorism Database (I had wanted to include the UK, but for whatever reason I was unable to find data for it there, and I left out Greece and Spain because they had extremely high incidences of terrorism that would have skewed the findings). I got my Muslim percentages from the Pew Forum. It should be noted that the percentages that are Muslim in the various countries have likely fluctuated over the past 40 years, so it’s not a perfect comparison. Looking at the data, you could make a case in either direction. On the one hand, Portugal has almost no Muslims and one of the highest rates of terrorism. Canada has nearly twice as many Muslims per unit of population as the United States but has suffered fewer terrorist attacks per unit of population. France’s high rate of terrorist attacks alongside a large Muslim population is likely connected to sociological problems within France–immigrants from Algeria typically suffer significantly from mistreatment on racial grounds in that country, and many Muslims in France have low socio-economic status.

But on the contrary, one could argue that a relationship might appear if one removed the US and Portugal from the data. But why would you exclude those countries? What is different about them that makes them outliers? I suppose you could make the argument that Islam leads to terrorism once you have more than 2%, and that prior to that, there are not enough Muslims per unit of population for it to make a difference. It’s hard to say.

I am not convinced either way by the data. What I am convinced of is the need to persuade all people, Muslim and non-Muslim, that the principle of retaliation is generally immoral insofar as it causes more harm than it alleviates. Permitting without endorsing is not equivalent to condemnation, and condemnation is what is needed.

2 Comments to “Islam and Terrorism”