I was reminded of an old thought I had about democracy the other day that I had not as of yet put into blog form. The contention is basically this–one cannot derive the social interest from an amalgamation of individual or subgroup interests. Let me explain.

Imagine if you will that you have two contending interest groups within society. Say, for instance, that one of them is the labour interest, represented by unions, and the other is the capital interest, represented by business groups. Each group perceives it to be in their interest to maximise the portion of wealth they receive from the businesses that both groups are mutually involved in. The unions want pensions, high wages, short hours, lots of vacation time, secure employment, and so on. The business groups want the workers to work the maximum hours for minimum wages and to be permitted to hire and fire said workers at will.

The trouble, of course, is that neither of these interests is in the long-term social interest. If business is ultimately victorious, the workers will not only have a miserable quality of life, but they will eventually become unable to purchase the goods produced by their own businesses, eventually crippled the economy. If the union interest prevails, eventually so much of the product will go to the workers that capital accumulation and investment will become impossible; the economy will cease to advance and develop, and the businesses will eventually be put out of business by faster-developing foreign rivals. Both the capital interest and the labour interest are considering only the immediate gains open to them. Neither is considering what is good for everyone in the long-run, what will make society as a whole a good place in which to live–the social interest.

It falls to the state to make the decision as to what the balance should be. Now, in non-democratic circumstances, the state is a separate entity from both the unions and the businesses. If the state is well-structured, it will justly pursue the social interest (what is good for the entire society as a whole). If it is poorly structured, it will pursue the interest of the individuals that comprise it and decide the question through bribes or some such nonsense. When we discuss what kind of non-democratic state we want, we are looking to fill the state with people who are likely to consider the social interest over and above their personal interest–who are lovers of the good and of the use of power to pursue it, not lovers of money and personal gain. Even more importantly, we are looking for a sustainable way in which to do this such that the state continually selects the right people generation after generation. That’s a difficult task for someone trying to structure a state, but it is theoretically feasible. If you succeed in filling the state with those who both know and care about the social interest, the social interest will be pursued.

In democracy, however, things are different. In democracy, the state is produced by the vote, and the outcome of the vote is determined predominately by two things:

What’s important to note is that neither of these groups (the voters and donors) is generally thought to be concerned with the social interest.

I invite the reader to recall the famous line from the 1980 presidential debate from Ronald Reagan, where he invited voters to consider whether they were better off than they were four years ago. Note that the question “are you better off than you were four years ago” is not “is society better off” or “is the state better off” or some such thing. The voter is being invited to vote along the lines of his personal interest, not some wider conception of the public good. We see this very nearly every election. It is considered perfectly acceptable to choose to vote for a candidate or party on the basis of which one promises the voter the lower rate of tax or the superior financial position.

So, getting back to our union case, in a democratic system you will generally have voters either supporting the unions or the businesses depending on where their personal interests lie. The businesses and unions will set up lobbying groups and PACs and such things, and donate money to candidates and parties. These candidates and parties will take stock of who they’re getting their money from and whether or not it is possible to find a majority to support the side in question, and will then take that side. So what you will get is a broadly union party and a broadly business party. In the United States, that’s basically what we have. The republicans try to push things in a business direction while the democrats try to push things in a union direction.

The thing is that even if the unions or businesses get what they want, they will not stop pushing. If you give unions a 1% pay rise, they only want them hiked further, and the converse is true of business–if you cut wages by 1%, they will only want to cut them further. At no point will a union or a business be heard to say “we don’t need this extra money; it’s not sustainable to have this extra money; let’s give it to our counterpart”. And so the same is true of the parties–just as neither the union interest nor the business interest is seeking an optimal position or equilibrium, neither are the parties. The more things move to the left, the further left the democrats will become, and the more things move to the right, the further right the republicans will become. The parties push the pendulum in one direction exclusively; they do not seek to hold it in one specific place.

This makes it impossible in democracies for the social interest to ever be found and maintained sustainably. Think of it, quite literally, as a pendulum:

Now, this is not to suggest (despite the colour coordination of my mediocre drawing) that centrists are correct, or that whatever is precisely in between the actual positions of the two parties is the correct policy, that we should pursue a “purple” solution to our red/blue problems. Recall that, the further right or left one goes, the more right or left the entire social discourse becomes, and the more pushed over in that direction the opposition becomes. It is entirely feasible for the entire debate to be some distance away from the social interest, as it would be in this case: 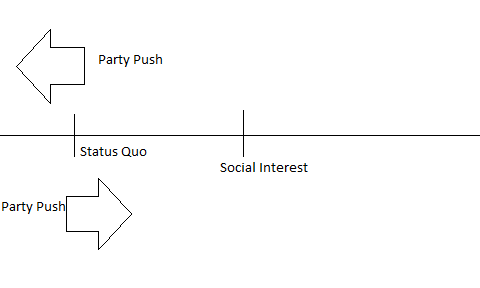 If you don’t believe me, go to a European country and try to make acceptable right wing arguments in the American context, or go to the United States from Europe and try to make acceptable left wing arguments from the European context; neither will work, not because they are any more or less true, but because of where the discourse in that place is and what the citizens there are habituated to hearing and considering.

To provide an example, if say, we are in a time where the business interest is nearly completely dominant (the Gilded Age, for instance), the left may merely be requesting for the legalisation of trade unions–but once given that, they will push further. The left is “more correct” in so far as the social interest was in the direction in which the left was pushing during the Gilded Age, but the left nonetheless did not know the social interest or where to stop, so in some cases, unions brought about the demise of their own jobs by demanding and obtaining more than what was sustainable in a globalised world in which cheaper labour can be found elsewhere, and we got outsourcing and consequently some backlash against the union position, in so far as it drove off industry to say, China. But those who are critical of unions again are not looking for the social interest–they are merely trying to break unions for their own benefit. Making the workers poorer enriches business in the short run, but in the long run it undermines the workers’ ability to supply demand, and so you get a dependency by the workers on credit, and the recent recession from the collapse of said credit. Perhaps the reader does not agree with some of the details of this story, but they’re not particularly important–the point is that our society consists of self-interested groups that have no concern at all for what is the right balance of interests, and who will continually act as though one of these directions is always good and the other always bad. Simply put, democracy produces black and white politics.

Because the state is not independent of these interest groups but relies upon them for money and votes, it either adopts the views of one group or the other. It does not seek the social interest, and it does not find the social interest. A just society consequently cannot develop–if it exists, it only exists momentarily and by accident, until one group of interests or other group of interests succeeds in pushing it back out again. Moreover, it is nonsense for a democratically elected government to say it governs on behalf of all its citizens when it governs on behalf of one interest or group of interests against another interest or group of interests without any effort made at finding the proper place at which to reconcile them for the universal benefit.

4 Comments to “The Democracy Pendulum”