Democratic theorists are fond of saying that democracy has a unique claim to legitimacy because it is the only system of government that can be accepted by all reasonable people without qualifications. Today I will illustrate precisely what this argument says and then endeavour to kill it via a metaphor I call “Mount Democracy”.

First, there’s the issue of what the democratic legitimation argument says. This argument, made with some variations from theorists including John Rawls and David Estlund, proposes something often called the “acceptability requirement”. The most common way of saying it is to suggest that in order to be legitimate, a government must be acceptable to all reasonable people. “Reasonable” is an interesting caveat. The democratic theorists believe that all reasonable people accept the premise that all people have an equal claim on the government to have their interests or beliefs heard. Unreasonable people are typically thought to include racists and sexists who think that some group does not have that equal claim for an arbitrary and illogical reason (i.e. “they’re black” or “they’re women” or “they don’t share our religious views”, and so on down the line). The democratic theorists believe that universal suffrage is key to satisfying the acceptability requirement, because it gives every person an equal vote, an equal opportunity to be heard.

However, I am going to argue that what universal suffrage really means is not everyone being equally heard and equally addressed, but that instead this argument rewards conformity toward a central position and punishes creativity or nonconformity. Rather than encouraging pluralism and positive discourse, as democratic deliberation theorists (like Jurgen Habermas) claim,  democracy inhibits it. A bold statement, you might say. Let’s see how it works.

People in society are different. They have different beliefs, different interests, different goals, different ethics. There are many, many kinds of people and kinds of opinions, not merely on a left-right axis or even on a political compass, but along every imaginable continuum, different people are in different positions, and some positions are more commonly held than others. If you take a person and put together all of that person’s beliefs, positions, interests, and so on together, you could, with sufficient data and computing power, calculate the sum similarity of one person to another person. You could even do this across all of society, and calculate how similar or different a person was, on average, from all other people. Considering that we are combining a very large number of positions together, a representation of this data would not look like a graph, but rather a mountain with a circular base, where the elevation represents the number of people with that given level of similarity to the average. Let’s call this mountain “Mount Democracy”. The peak of Mt. Democracy, its highest elevation, would be where the people who are most similar to the average are, and, as you moved further down the mountain, you would get to lower and lower levels of similarity. You can visualise this with a topographical map: 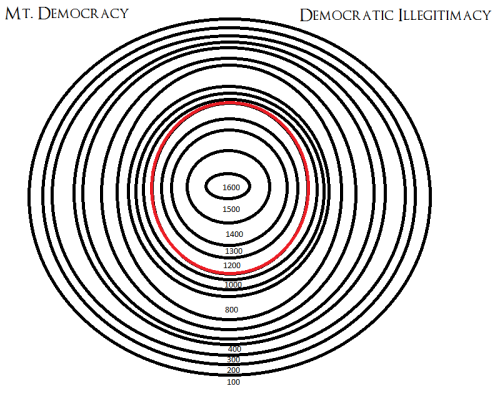 The peak of the mountain is represented by the centre. In this example, there are 1600 people at the centre. These are the people with the most typical, the most average beliefs, tastes, opinions, interests, and preferences. Each ring represents a slightly less average view, and contains 100 fewer people than the next ring closer to the centre. Here, there are 16 rings, with the outer most zone containing a mere 100 quite strange individuals.

It is reasonable here to say that the closer a ring is to the centre of Mt. Democracy, the more likely it is that the individuals in said ring will agree with the average voter. In this example, in order to achieve an overall majority of all the votes you need just over 6000. So if you are running for office or having a referendum in this democracy, the rational course of action is to find the smoothest strategy to 6000 supporters. The easiest way to do this is to find the people who are most likely to agree with one another and target them–their preferences, their interests, their beliefs. Here’s where the red ring comes in. In order to get a majority of voters the easiest way possible, the rational strategy is to appeal to the voters inside the red ring, because those voters represent the easiest majority to form–they are the voters who are most likely to agree with each other.

It is an irrational political strategy to try to appeal to voters who are further out. There are fewer voters in the outer rings, and these voters are increasingly unlikely to agree with the easy majority the further out you go. What this means is that if you are abnormal, if your personality, your interests, your beliefs, your intellect, if you find yourself not like most people, if you find yourself not agreeing with most people, you are, in most instances, oppressed by democracy. This isn’t actually a very new idea–it is relatively similar to the Downs Model of voting. However, the proponents of the Downs model have missed the legitimacy problem the model poses for democracy. If you are generally abnormal, democracy does not treat you equally to other citizens. Candidates do not try to appeal to you or to your beliefs or interests.

When’s the last time Barack Obama or Mitt Romney tried to get the Muslim vote? When’s the last time they tried to get the intellectual vote, much less the Rawlsian vote? When’s the last time they tried to win over the Marxists? The libertarians? The poor? The answer, to all of these questions, is, of course, never. Democratic politicians do not care about you if you are abnormal. They have no reason to. They don’t need you to win. They expect you to go along with having what amounts to no political say whatsoever because hey, you have the right to vote. You have universal suffrage. Why should you care if you’re a feminist, a Marxist, a libertarian and your issues aren’t on the table or up for discussion? You still get to vote for any of the various candidates who absolutely do not care about you or your beliefs. Democracy uses universal suffrage as a coercive propaganda tool to subjugate the less normal to a consensus of the average. Unless you’re just like everyone else, democracy is not the system for you. Moreover, the entire argument for democratic legitimacy breaks down here, because this means that there are a large number of rational people who can look at democracy and say “hey, wait a moment, our interests and beliefs are not all considered equally here–some of us are being consistently marginalised and disrespected”.

And this is in an ideal democratic society, not the one we live in. In our democracy, politicians require the financial support of special interests in order to fund the propaganda they throw at the people inside the red ring. This means that, in practise, democratic leaders end up being unable to govern as fair, impartial arbiters who take into account the pluralists beliefs and positions of their support base, but that instead there is an inherent corrupting connection between the people with money and the people who govern, such that the latter must serve the former in order to fund their continued political existence. When’s the last time you heard a democratic candidate talk about the plight of truly poor, not the middle class, not the people in the red ring, the truly, absolutely wretchedly poor people? You won’t hear it. Their interests aren’t taken seriously, they are not in the red ring, they are not funding the campaigns, no one cares about them. They can go out and vote, and it won’t make a difference. There aren’t enough of them, the election propaganda isn’t meant for them. You might respond to this by saying “why don’t all the people in the outer rings join together”? They can’t join together. They’re too dissimilar from each other, too independent. That’s why they’re out there to begin with–to force them to create a faction strips them of their creative and intellectual free will.

You aren’t going to get a society in which the government takes seriously its commitment to the whole of society, to all citizens, as long as we’re democratic, as long as the government is directly a product of the people. In order to have a government that does what the democratic theorists want, that really takes every citizen seriously as a part of the collective, you need a government that is removed from the people, that itself does not owe any section of the society anything. It must not be indebted to the average person for votes, or to the rich person for campaign backing. It must have the best possible background of ideas and concepts and a deep personal interest in issues of right and wrong, good and band, just and unjust. It must not simply be talented at people pleasing and fundraising, at being uncontroversial and broadly acceptable to the average person. It must be sophiarchist, not democratic. And yes, I encourage those of you who agree with me to refer to that red ring as the “red ring of death“.