Recently, an article appeared in the British newspaper Daily Mail alleging that global warming stopped 16 years ago. Of course, my first instinct was to recall that this is the Daily Mail we’re talking about, and they’re not exactly reputable:

But leaving aside for the moment the Daily Mail‘s reputation for inaccuracy, let us examine the evidence they claim they have from the British Meteorological Office, discover if this is true or not, and the implications of that truth or lack thereof are.

David Rose, the writer of the Daily Mail piece, claims that new evidence from the Met Office (as the British Meteorological Office is known) proves that global warming has plateaued:

The world stopped getting warmer almost 16 years ago, according to new data released last week. The figures, which have triggered debate among climate scientists, reveal that from the beginning of 1997 until August 2012, there was no discernible rise in aggregate global temperatures. This means that the ‘plateau’ or ‘pause’ in global warming has now lasted for about the same time as the previous period when temperatures rose, 1980 to 1996. Before that, temperatures had been stable or declining for about 40 years.

However, the Met Office responded to Rose’s piece by posting on their blog the specific answers they provided to Rose’s questions. Rose asked:

First, please confirm that they do indeed reveal no warming trend since 1997.

To this the Met Office responded:

The linear trend from August 1997 (in the middle of an exceptionally strong El Nino) to August 2012 (coming at the tail end of a double-dip La Nina) is about 0.03°C/decade, amounting to a temperature increase of 0.05°C over that period, but equally we could calculate the linear trend from 1999, during the subsequent La Nina, and show a more substantial warming. As we’ve stressed before, choosing a starting or end point on short-term scales can be very misleading. Climate change can only be detected from multi-decadal timescales due to the inherent variability in the climate system. If you use a longer period from HadCRUT4 the trend looks very different. For example, 1979 to 2011 shows 0.16°C/decade (or 0.15°C/decade in the NCDC dataset, 0.16°C/decade in GISS). Looking at successive decades over this period, each decade was warmer than the previous – so the 1990s were warmer than the 1980s, and the 2000s were warmer than both. Eight of the top ten warmest years have occurred in the last decade. Over the last 140 years global surface temperatures have risen by about 0.8ºC. However, within this record there have been several periods lasting a decade or more during which temperatures have risen very slowly or cooled. The current period of reduced warming is not unprecedented and 15 year long periods are not unusual.

In other words, in response to Rose’s very first question to the Met Office, the Met Office cast significant doubt on the very claim Rose would eventually make while claiming to have the support of the Met Office. The response also describes Rose’s piece as “misleading information”. The Met Office then offered up this graph, illustrating how the last decade has still been the warmest in recorded history, that the claims Rose is making are based on the deliberately misleading time-scale he selected (choosing as his start year a year that was during a warm El Nino cycle): 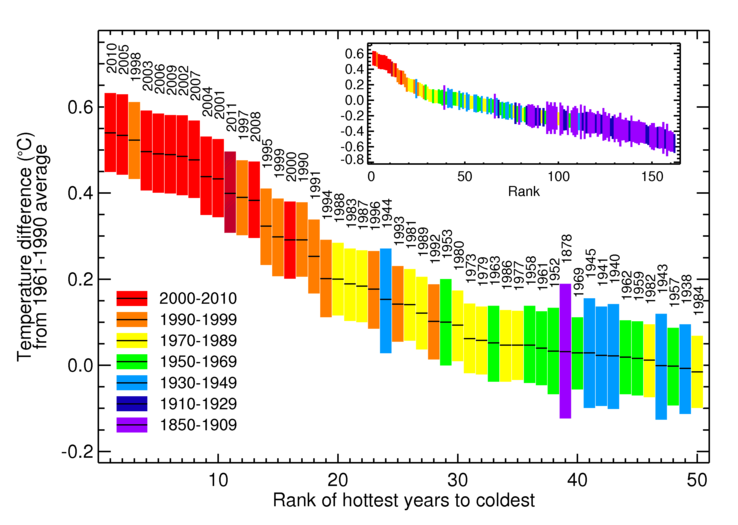 What’s shocking about Rose’s attempt to mislead the public is that it comes right on the heels of new information indicating that the ice caps are shrinking at a much faster rate than anticipated:

So just a month after new evidence that very much confirms that global warming is real and is happening even faster than we expected it to, and just after new research showed that Britain’s summers in particular are being dramatically impacted by the increased rate of ice melt, David Rose is claiming in the Daily Mail that global warming isn’t happening over the objection of the very researchers whose data his claim is based upon.

The last thing that is needed at a time when humanity needs to address the dangers climate changes brings (both in terms of trying to prevent them and in terms of trying to live with and survive them) is for columnists to deliberately distort the information scientists and experts give them in order to advance sceptical theories unsupported by data. This only fuels further the perception that there is a significant scientific dispute over whether or not climate change is happening. This fuels a disconnect between what the climate scientists are really discovering and what the media is reporting. Max Boykoff from the Center for Science and Technology Policy Research in Colorado uses this graph to illustrate this gap:

Journalists like Rose are effectively biasing the debate against expert opinion. There are a lot of people still out there who don’t believe in global warming, and journalists trying to appear “fair and balanced” are willing to represent their view even though there is little or no expert opinion to support it. Representing all views, informed or not informed, has become more important than presenting the facts of the research to people as they are and allowing them to reach their own conclusions. Many journalists are more or less happy to become agents of disinformation on behalf of their political causes. As a result, a third of Americans still do not believe in global warming with that number increasing to 43% if the global warming is described as being the result of “human activity”. The consequence is that efforts on the part of the US government to do anything about global warming under Obama have gone nowhere.

Once again, we have a large number of people believing demonstrably false things spread by the very people (journalists) whose job it is to inform them, and, as a consequence, harming their own long term interests by electing politicians who will act based on that demonstrably false information to the detriment of society. And people tell me that democracy isn’t so bad.

9 Comments to “The Daily Mail, Global Warming, and Disinformation”