These Executive Orders Make No Sense

After weeks of failed negotiations between the House and the Senate, the President is attempting to provide additional stimulus through executive action. The orders are probably unconstitutional–all money bills must begin in the House of Representatives, per the “origination clause”. They will be challenged in the courts, and I doubt they come into force. That said, if the President had ordered a strong aid package, I would be willing to consider supporting a challenge to congress’ spending authority. Congress has neglected its duty to protect Americans from the economic consequences of our anti-coronavirus policies. The scale of the disaster is so immense that I would support trying anything that might help tens of millions of unemployed people stay in their homes and put food on the table. When wealthy senators sit on their hands and deny ordinary people the means of subsistence because they feel offering aid might diminish their “incentive” to take jobs that pay less than $600 a week, they get no sympathy from me.

Unfortunately, I don’t get to make a provocative argument that the President is justified in running over congress, because this President has taken action that doesn’t make any sense. 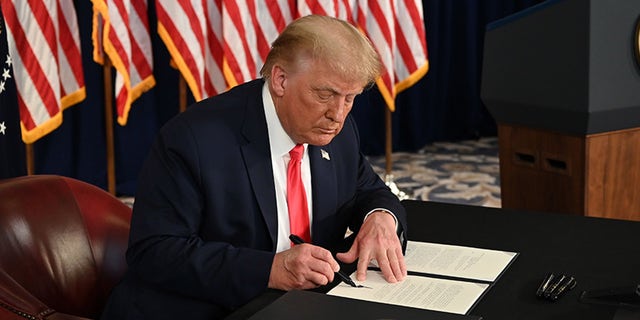 Consider the President’s order to renew the federal unemployment supplement at a reduced value of $400 per week. The people collecting unemployment are spending all of their money on essentials. By taking a third of their income, the President is effectively proposing to cut their consumption by a third. This means that in the middle of an economic cataclysm, tens of millions of Americans will suddenly reduce their consumer spending by a third! Those businesses that have survived coronavirus to this point need every penny of that money to stay alive, and many more will shutter if the benefit is cut from $600 per week to $400.

But that’s not all–the President’s order mandates that state governments pay $100 of the $400. If the states don’t put up the $100, their citizens lose the whole $400. Many states simply don’t have the money to contribute $100 per week to all their unemployed. States are seeing dramatic revenue shortfalls because of collapsing economic output. They don’t have the money to maintain their extant public services, let alone take on new obligations. Unlike the federal government, state governments cannot purchase their own bonds through quantitative easing. They can’t print their way out of trouble. So if this order comes into force, many states won’t take part, and that means that many citizens will lose their federal unemployment supplement through the misfortune of happening to live in states in financial trouble. The President’s executive action offers no aid to state governments–even though the states have asked for hundreds of billions in aid. It’s one thing to refuse to offer aid to the states. It’s quite another to demand that they shill out even more money they don’t have. If the federal governments wants to encourage fiscal responsibility on the part of the states, it should be helping the states make ends meet instead of giving them new obligations they can’t meet.

So some of our unemployed will get a diminished, rump federal supplement. Others will get nothing. It will all be decided by which states they happen to live in. And in the meantime, because the executive action doesn’t provide aid to states, massive revenue shortfalls will continue to force the states–many of whom are constrained by formal balanced budget requirements–to cut schools, infrastructure, police, and pensions. These cuts will, of course, create more unemployment and further strangle economic growth.

Republicans in the Senate argue that aid to states will be used to bail out pension programs in blue states. They think the federal unemployment supplement is too generous and creates too much disincentive. They have no idea what they are up against. The economic figures are apocalyptic: 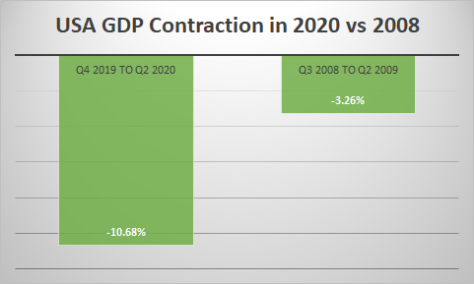 This dwarfs the “Great Recession” of 2008, which itself dwarfed every economic disturbance since the Great Depression. We made whole movies about how bad 2008 was. Remember The Big Short? Donald Trump became the President in part because so many people in middle America were left out of the recovery. Their jobs never came back:

Now the same dumb mistakes are being made in the face of a recession that is already three times larger than 2008, and which may climb ever higher this quarter. Our government is failing to take the scale of the crisis seriously. Trump’s executive action promises to take $44 billion from FEMA to help pay for economic aid. But this is a drop in the bucket compared to what was debated in congress, where even the Senate was discussing spending another $1 trillion and the House was proposing $3 trillion.

The original CARES Act provided $2.2 trillion in stimulus. In 2008, the Bush and Obama administrations combined to spend about $1.2 trillion. With our recession already three times larger than 2008, we would need to spend almost $4 trillion just to keep pace with what was spent back then. That doesn’t include inflation. And what we spent in 2008 was clearly inadequate–it left so many rural counties mired in economic malaise that Donald Trump was able to become the President.

If our federal government doesn’t get serious about this, there’s going to be more contraction in the third quarter of 2020. The President is up for re-election, and even that doesn’t seem to properly motivate him to do enough to give himself a chance. He himself knows that it was the crisis of 2008 with fatally doomed John McCain’s presidential campaign. In the 2016 primaries, he used this as a weapon against Jeb Bush:

Your brother and your brother’s administration gave us Barack Obama, because it was such a disaster those last three months that Abraham Lincoln couldn’t have been elected.

George W. Bush gave us Barack Obama, and Barack Obama gave us Donald Trump, and now Donald Trump will give us Joe Biden, who promises that “nothing will fundamentally change”. How much longer can we repeatedly mismanage our economy and condemn our people to precarity? How many more sewage administrations will our people tolerate?

We’re about to find out.