This year has been politically very stale, and so I continue to get my kicks from the strange things Kanye West coughs up on Twitter. Kanye is a window into the American id. He doesn’t read and he doesn’t listen to anybody. He goes out of his way to avoid other people’s interpretations. This enables him to more directly access what’s happening, but it robs him of the intellectual tools necessary to refine his understanding. Recently Kanye tweeted:

Who is Candace Owens? I’d never heard of her. Kanye made me look her up, and looking up Candace Owens taught me something–despite Bernie Sanders, despite DSA, despite all the left activism in the United States over the past few years, there are still millions and millions of Americans who have no idea a left alternative to the Democratic Party establishment exists.

Candace Owens talks politics on YouTube. People who talk politics on YouTube often have very large audiences–much larger than my typical audience. But there’s a cost to this–they have to get attention on YouTube, and that requires them to rant a lot. So YouTubers do a very populist kind of politics. We often don’t take them seriously, but they have reach and a measure of influence with niche audiences. The Owens video I’m about to show you has about 137,000 hits. Only three of my 786 pieces have topped that figure.

She’s right about this–as we discussed in the last post, liberal politics in the United States has increasingly relied on the propagation of fear. African-Americans are meant to support the Democrats because Donald Trump is scary, and he’s meant to be scary because he’s meant to be racist. If black voters have to support the Democrats because the alternative is racist, black voters don’t have much leverage over the Democratic Party–it can expect their support without earning it. Owens is right that material racial inequality did not improve during the Obama years. Indeed, it worsened: 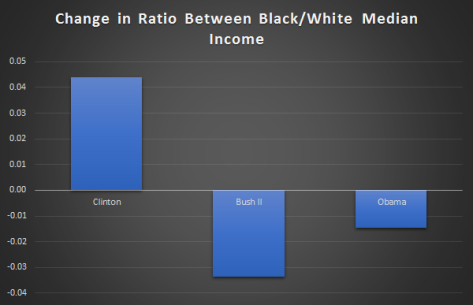 The trouble is that for Owens, this is a reason to support the Republicans! The Republicans don’t have a good record of helping black folks. Look at that chart! George W. Bush was worse for racial equality than Obama. The Republicans don’t have a bunch of new racial equality policies in 2018 that they didn’t have in 2002. The Trump administration began the same way the Bush administration did–with a tax cut for the rich. Why should we expect Trump to be better for blacks than Bush was?

For Owens, if the Democrats aren’t helping, the Republicans must be the answer. But both the Democrats and Republicans have long ignored African-American interests. People who don’t think especially deeply about American politics tend to think that the Democrats and the Republicans embody two fixed alternatives, but the parties contain many diverse and conflicting factions. Party policy is dictated by the factions which predominate. There are many ways to distinguish these factions. Bernie supporters and Hillary supporters. Bannonites and establishment Republicans. Social conservatives, libertarians, and hawks. Democratic socialists and Rockefeller Democrats. We could go on and on.

When people like Owens pitch the political contest at the interparty level, they miss the intraparty level. Since the debut of the modern primary system in 1972, this is where the action is–different factions of the Democratic and Republican Parties fight it out for dominance in the primaries, and those who win out get to push their agenda when their respective party is doing well, insofar as our gridlocked institutions still allow anyone to do anything.

Kanye describes himself as a “free-thinker”, but real free-thinking requires us to consider how we can exploit the primary system to transform the parties from within. Switching parties doesn’t work when the factions which dominate both don’t care about you. African-American voters need to do more than just threaten to exit the Democratic Party–they need to work to change what the Democratic Party stands for.

All of this is pretty obvious to the folks who supported Bernie Sanders in 2016. But apparently it’s not obvious to Owens or to her 188,000 subscribers. For these people, politics stops at who you choose to vote for in general elections. If African-Americans and poor and working people of all colors and creeds are unable to do more to shape primary contests, they won’t have good options in general elections. Only those who can win primaries can participate in general elections–those who ignore the former are condemned to empty choices in the latter.

In tweeting in support of Owens, Kanye recognises that the Democratic Party isn’t doing enough for our most vulnerable people. But instead of throwing his support behind elements within the left which aim to transform the party, he gets behind Trump:

You don't have to agree with trump but the mob can't make me not love him. We are both dragon energy. He is my brother. I love everyone. I don't agree with everything anyone does. That's what makes us individuals. And we have the right to independent thought.

He likely does this because, as Kanye himself has said, he “doesn’t read“–so he likely has no idea that there are people out there who want to transform the party, and he likely hasn’t read enough political economy to understand how deeply deficient the Republican response is to the economic problems facing low income communities of all complexions. Donald Trump won 8% of the African-American vote. This means that at least 1.3 million African-Americans presently buy into something like what Candace Owens is selling. These people are rightfully disgusted with a Democratic Party which has failed to deliver promised material economic benefits to their communities. But the left has continually failed to connect with these people or to mobilise them.

Kanye West isn’t supporting Trump because he has deep-seated right-wing beliefs. In 2016, when Kanye first said that he didn’t vote, but would have voted for Trump, he added:

He donated $2,700 Clinton campaign and $15,000 to the DNC. Mere days before this set of pro-Trump tweets, Kanye tweeted against capitalism:

He has spent a lot of his time talking about the evils of classism:

Class is the new way to discriminate against people, to hold people down, to hold people in their place based on where their kids go to school, how much money they make, what they drive, where they live and what type of clothes they have and how much they have in their account for retirement.

Of course, class isn’t the new way to discriminate against people. It’s been around for ages. But remember, Kanye doesn’t read. Millions and millions of Americans don’t read. They don’t have time to read, because they’re busy working multiple jobs to pay rent while still trying to find the time to take care of their kids. Despite everything Bernie Sanders did, these people still don’t know about the left. Telling them to “educate themselves” isn’t going to get it done. Ridiculing them on the internet–the default left response to Kanye’s latest tweet storm–just reinforces their belief that the left holds them in contempt and doesn’t care about them or their problems. We have to help people like Kanye find the movements that can help them and the people they care about. If we don’t do that, the result is more Candace Owens subscribers on YouTube.