Trump Welcomes the Hatred of the Press

Remember back during the 2016 campaign when the media couldn’t stop covering Donald Trump? It hasn’t really changed, has it? The press hasn’t adapted much. Yes, there’s a lot of content about how bad Trump is, and some of it is even policy-oriented, focusing on some of the more odious bits and pieces of the Trump tax plan. But this is having no impact on Trump’s approval rating, which has hovered in the mid to upper 30s for most of the first year of his presidency–higher than the low 30s figures he suffered from throughout most of the 2016 campaign. Why is it that nothing the media says or does seems to seriously harm Trump?

Back in May of 2016 I wrote about how Trump handled a New York Times story concerning his mistreatment of women. Trump immediately attacked the paper, firing off 12 tweets about how biased NYT is against him. The most popular of the 12 was this one:

The media is really on a witch-hunt against me. False reporting, and plenty of it – but we will prevail!

This is before Trump co-opted the term “fake news”–an expression which was first used in the context of the 2016 campaign by journalists criticizing misleading pro-Trump stories on social media. Trump flipped that expression and turned it to his advantage. In January, you can still find journalists attempting to protect the term. But at this point the argument has clearly been lost–“fake news” is now a Trumpist term for anti-Trump press coverage.

In addition to this verbal mudslinging, Trump has also appeared to threaten the freedom of the press with belligerent stuff like this:

With all of the Fake News coming out of NBC and the Networks, at what point is it appropriate to challenge their License? Bad for country!

This kind of tweet is clearly designed to antagonize the press and make them worry that Trump has it out for them. But we’re almost a year into the Trump presidency, and there’s been little concrete action by the administration in this direction. Trump hasn’t gone after the freedom of the press, but he seems to want people think that he might.

Maybe it’s completely unintentional and Trump just bumbles into these kinds of tweets. But regardless of what Trump means to do, tweets like this have an effect on journalists–they make them really, really, really hate Trump. The more the journalists hate Trump, the harder it is for them to keep their cool when they cover him, and the easier it becomes for Trump to depict them as biased Trump haters. Those attacks from Trump in turn tick off the journalists again, perpetuating a vicious cycle in which the press helps Trump discredit it: 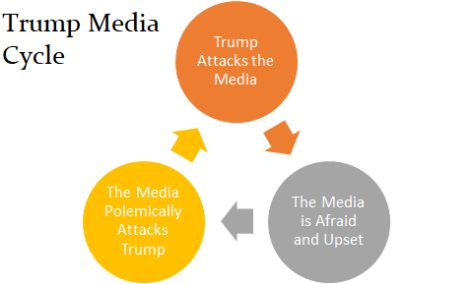 Under ordinary circumstances, this kind of cycle would work against the president. Usually when a politician gets in a war with the press, the politician takes more damage than the press does. This is why politicians are traditionally told by their handlers not to get in these kinds of fights. But Trump is different–everyone who is prepared to side with the press has already done so. We’re left with this 35-40% of the electorate which has sided with Trump over the press and is at this point completely indifferent to what the media reports about him.

The press is stuck between a rock and a hard place. It can’t break Trump’s hold on his bloc by continuing to vitriolically assault him–if anything, these assaults help Trump consolidate his hold over these people. But at the same time it worries that if it eases off, Trump will make inroads within the rest of the population.

Under ordinary circumstances, 35-40% would not be enough people to succeed politically. It’s a record low favorability level for a winning presidential candidate, and Trump very nearly lost the election with this bloc. But the Democrats have made themselves so unpopular that Trump managed to squeak through anyway. The left can’t attack its way into the Trump bloc, but it can rebuild its own appeal. That’s why so much of my writing since the election has focused on reconstructing the American left rather than on Trump take-downs. The people who can be won over with that sort of thing were long since won over. What’s needed now are not sticks, but carrots–inspiring reasons to get behind a different kind of politics.

It’s still useful to pressure our legislators to resist bad policies, but that’s more about winning legislative fights than electoral ones. We need to figure out what we’re going to do when we get these people out. The more inspiring our policies, the easier it will be to build inspiring campaigns on top of them. That’s why it continues to be important to fight and refight the Sanders/Clinton primary battle–the Democrats don’t have a clear, inspiring ideological orientation at the moment, and that needs to change if we’re to consistently do better. We can’t be the movement that tells everyone everything was fine during the Obama years–we have to promise people a future to believe in.

Journalists and the media can participate in this, not by helping Trump feed his narrative that they all conspire against him, but by covering and publishing the work that left-wing writers are doing to rebuild and recast this movement. People don’t need to hear more about Trump’s tweets or Trump’s relationship with the Russians. They need to hear more about the genuine, compelling alternatives to him which aren’t simply a return to the politics of Obama and Clinton.

The unfortunate thing is that it’s difficult for journalists to help us in this because of the incentives to which their industry is subject. Trump doesn’t just goad them into going after him–the fight between Trump and the press remains fertile soil for ratings and clicks. The press is incentivized to participate in its own discrediting not just by its own anger with Trump but by the attention these confrontations generate for networks and shows. Continuing to play Trump’s game is a cathartic release, but it’s easy for journalists to rationalize that cathartic release because it also gets them fame and money. Because of this, the rebuilding of the left must predominately be done outside the gaze of the mainstream media, in niche publications like Current Affairs.

The right has faced similar problems over the years. Publications like National Review have long sought to direct and guide the development of the conservative movement, but their semi-serious, long-form tone and style necessarily relegates them to a small, elite audience. National Review hated Trump, but it made no difference, because the conservative movement is really led by polemical media outlets which entertain more than they intellectualize–Breitbart, FOX, etc. That’s why conservatism is so intellectually gutted–the charlatans are at the controls, and the old Burkeans and Hayekians have been left in the woods to die alone. One of the big risks is that the rebirth of the left will be similarly over-dominated by large media entities which prioritize entertainment, clicks, and ratings. There are a lot of “left” shows and websites which don’t think very seriously about politics and instead focus on making us laugh or generating the visceral, emotional response that often leads people to share content online. The influence of such shows and sites is pernicious–it puts our movement in the hands of well-intentioned people who don’t know what they’re doing and don’t really care about politics as a craft. We have to keep an eye out for them. They are seductive–they know how to make us to laugh and how to make us mad. But they don’t know how to make us think, at least not in the deep, sustained way we need.

Enough with the angry journalists and the angry comedians. We need to build something here. We don’t need more wannabe Bob Woodwards or Stephen Colberts. We need to actually think about things.