For a couple of years now I’ve had a theory, one I haven’t told you all about. It goes something like this–Canada is just like us, but 5-10 years ago. Here’s how it works.

Think about the history of Canadian Prime Ministers. Right now Canada has Justin Trudeau. He’s good-looking, he’s beloved internationally, but policy-wise he’s less progressive than you might think. He ran on a campaign of bringing change, but he’s not delivering on much of it. Canada is still knee-deep in tar sands oil and Trudeau hasn’t gotten serious yet about electoral reform. He’s passed a stimulus package, but it’s rather modest.

Obama passed a rather modest stimulus package. Obama stood by as the United States began fracking all over the place. Obama’s 2008 platform promised lots of things he never delivered. He campaigned as the bringer of hope and change, but the results underwhelmed. He was good-looking and beloved internationally. But Obama was elected in 2008. Trudeau was elected in 2015. That’s seven years later.

Who came before Trudeau? Stephen Harper. Harper pulled out of the Kyoto Protocol. He was in the pocket of big oil. He passed tax cuts that helped the rich. He participated in the War on Terror. Who does that sound like? George W. Bush.

Who came before Harper? Briefly Paul Martin, and, before him, Jean Chretien. What did they do? NAFTA. Neoliberal reforms. Deficit reduction.  Just like Bill Clinton and Al Gore (if Gore had won–and maybe he did). Chretien was first elected in 1993, one year after Clinton. 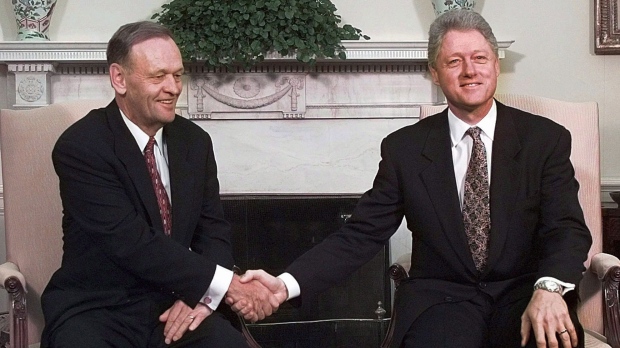 Who came before Chretian and Martin? Briefly Kim Campbell, and, before her, Brian Mulroney–Mulroney is the godfather of Canada’s economic shift to the right, and it was under Mulroney that Canada’s top 1% income share first began to accelerate upwards. They’re the Reagan and Bush. Mulroney was first elected in 1984, four years after Reagan. On average, the Canadian doppelganger follows the US original in 4.5 years. That rounds up to 5. 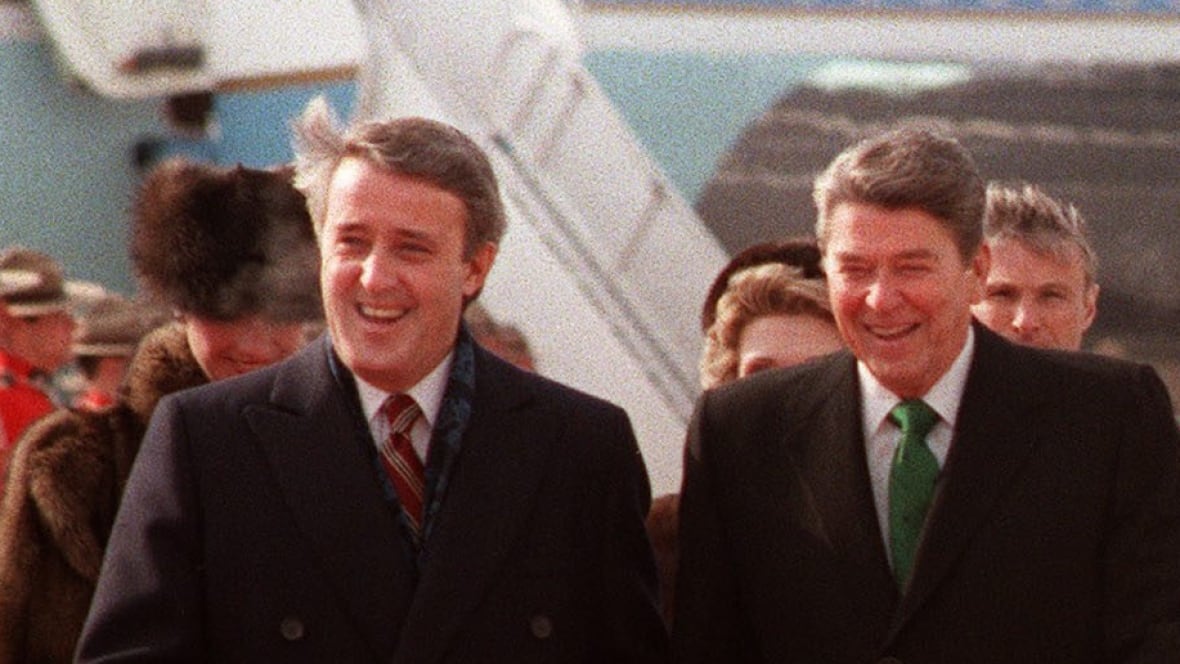 After 2007, the global economic crisis disrupts this trend by stalling out top 1% share in both countries. Because the US started growing top 1% share beyond 10% 12 years earlier, America is still more unequal than Canada. The Canadian data series ends in 2010, so we don’t yet know if inequality in Canada has begun growing again. We do know that US top 1% income share is still floating around near the pre-crash 2006 level.

But these post-2008 concerns aside, it’s nonetheless fascinating–once Canada began to move decisively to the right, it moved to the right at about the same speed America once did until larger global economic forces made this impossible.

The first question is probably easier to answer than the second. Canada is the northern neighbor of the most powerful country on earth. The two economies are heavily integrated and the two societies are English-speaking, have similar levels of per capita economic development, and share much in common culturally. We have every reason to think that Canada would tend to be heavily influenced by what goes on in the United States. It’s the delay that’s really fascinating.

The key thing seems to be that in the US, the economic crisis which gave rise to the neoliberal turn under Volcker and later Reagan started as an oil crisis, and Canada–because it has always had a large domestic oil supply–was able to avoid the worst affects of the oil shocks of the 70s. The two oil shocks occur in 73/74 (the OPEC embargo) and 79 (the Iranian Revolution). See what they do to US growth and inflation:

In the American case, everything turns grim during and after the oil shocks. But if we look at the Canadian figures the story is entirely different–because Canada exports so much oil, the oil boost counteracts the global bear market. Canada doesn’t go into recession at all until 1982:

Canadian inflation elevates a bit, but the difference is just four points or so, not six or eight:

Because of this, Pierre Trudeau–Justin’s father, and Canada’s Prime Minister for much of the late 70s and early 80s–hangs on until 1984, when he steps down and his party finally loses because, in an effort to reduce inflation, the Bank of Canada raises interest rates and kicks the country into recession. This is essentially the same fate that befell Carter–under Volcker, the Federal Reserve raised rates going into the 1980 election, ensuring a dreadful economic scenario which smoothly guided Reagan into office.

But of course, in Canada it happens about five years later, and then, because Canadian top 1% income share was about a fifth lower than America’s to begin with, it takes another four years for Canada to reach the American trough from 1976. Put the oil delay and the effects of starting from a lower base together, and we can see why Canada was playing from behind.

Today, oil is influencing Canadian politics again. Under Harper and Trudeau, Canada has become much more dependent on oil revenues, and because of American fracking under Obama the oil price collapsed in half:

This has given Canada a special negative experience which many other western democracies have been spared–a little petrol withdrawal in 2015:

That stagnation came at just the right moment for Trudeau, helping him unseat Harper. Where once oil slowed the pace of change in Canada, here it sped things along a little. Trudeau’s stimulus has helped Canada make up for falling oil revenues, delivering a nice, sharp boost. But Trudeau isn’t offering much else in the way of exciting economic change. At this point he’s increasingly known for social issue advocacy–for his feminism, for his support for LGBT causes, and so on. This means that if Canada’s economy slows, or if the benefits of the Trudeau stimulus are distributed poorly, his Liberal Party is unlikely to have bold economic policies in its back pocket to turn things around or get people excited.

Now, I’ve held back on writing this piece for a while, because Canada has a wildcard. Unlike the United States, it has a significant third party–the NDP. The NDP was slated to have a leadership contest in 2017, and if that leader were some kind of Corbyn/Sanders type, future anti-establishment sentiment in Canada might find a form of left-wing expression, radically divorcing Canada’s trajectory from America’s. But the NDP leadership contest resulted in the selection of Jagmeet Singh as leader. Singh eventually received the support of much of Thomas Mulcair’s faction. Mulcair is the former leader of the NDP who thought it would be a good strategy to compete with the Liberals by promising to be more fiscally responsible than them. This allowed the Liberal Party to steal left wing supporters who traditionally would have backed NDP. In this way, the Mulcair faction has turned the NDP from a left alternative into a party that looks an awful lot like Britain’s Liberal-Democrats–caught in the center and unable to excite anyone. Singh promises no new inspiring policies–the most radical thing about him is that he’s a Sikh and he wears a turban. This leaves the NDP effectively in an arms race with Trudeau to see who is more progressive on social issues and who can more firmly occupy the economic center. That might have been good politics once upon a time, but in a world where anti-establishment movements are on the ascension it leaves Canada without an anti-center party.

Now, the Canadian Conservative Party hasn’t figured this out yet. Like the Republican Party after Obama’s victory, it’s splintered into establishment and anti-establishment factions. In the recent Tory leadership contest, the establishment faction won out. But this is how it went at first in the Republican Party. Mitt Romney was the nominee in 2012, and many of us still believed well into 2015 that the Republicans would eventually nominate Jeb Bush or Marco Rubio rather than Trump. If Canada follows the American trajectory–and it usually does, after a while–we can expect the Conservative Party to lose the next election to Trudeau but to eventually rally around someone utterly bizarre, someone no one in Canadian politics can anticipate right now. The media often likes to offer up Kevin O’Leary as a Canadian Trump parallel, but he could be their Ted Cruz–the guy you see coming and worry about, but not the one that ends up prevailing in the end. 2017 is roughly equivalent in Trudeau’s term to 2010 for Obama, and by 2010 we knew about Cruz. We still couldn’t see Trump coming.

History teaches us that right wing parties don’t wander in the wilderness forever. Eventually they figure things out. There’s always a significant chunk of people who want to keep things the way they are, or make them the way they used to be. Donald Trump has demonstrated that the right can return to relevance in its old and fiery form even after the election of someone who might at first appear to be a turning point figure. The more Canadian liberals and leftists assume that they can make the next Canadian election into a social issue dick-measuring contest between Trudeau and Singh, the more likely it is that the right will come roaring back, as vicious and bloodthirsty as ever.

The best way to prevent it? When Trudeau wins the next election–and he probably will, especially if he keeps putting up annual GDP growth over 3%–the NDP has to adapt faster and better than the Conservatives do. In the 2020s, junk Singh and go to the left, and get there faster than the Tories get right. To beat Canadian Donald Trump in the 20s, unearth Canadian Bernie Sanders. Find an heir not to Mulcair but to Tommy Douglas, the father of Canadian single payer healthcare:

They’re enamoured with the wrong Tommy.