If Donald Trump Wants to Help Puerto Rico, He Should Help It Become a State

President Trump said he wants to help Puerto Rico deal with its debt (though his administration immediately U-turned on this). The territory has been devastated by multiple hurricanes and a long-running economic crisis. But while disaster aid and debt relief would be very good for Puerto Rico, what it really needs in the long-run is statehood. Here’s why.

For a decade, Puerto Rico has been in a continual, endless, miserable recession:

The labor force participation rate has dropped by a full fifth and hasn’t recovered at all:

The Puerto Rican government can do little to help because it is burdened with $73 billion in debt. This is equivalent to about 70% of GDP. Now, that’s not an exceptionally high figure–many countries have debt to GDP ratios higher than 70%, including the United States (106%), the UK (89%), Canada (92%), and, most infamously, Japan (250%). But Puerto Rico is a US territory, not a country or even a US state. This limits its options. Unlike a country, Puerto Rico can’t devalue its currency, and unlike a municipality, Puerto Rico is legally prohibited from defaulting on its debt. Indeed, the Puerto Rican constitution requires the territory to pay its debt before it can pay for additional non-debt obligations. These three constraints leave Puerto Rico with nowhere to go:

The federal government played some role in encouraging Puerto Rico to end up in this situation. It used to subsidise US manufacturers that chose to operate in Puerto Rico, but began phasing this program out in the late 90’s (and when they finished phasing it out in the mid-00’s, Puerto Rico entered recession). It also incentivized Americans to buy Puerto Rican government bonds, making it too easy for a large debt burden to accumulate quickly.

Puerto Rico has tried to get out of this triangular box. In 2014, it passed the Debt Enforcement and Recovery Act in a bid to enable Puerto Rican public corporations to renegotiate their debts. But this law was struck down in the courts because Puerto Rico is a territory and therefore cannot authorize its municipalities to seek bankruptcy relief. If it were a state, it could re-pass DERA and allow its municipalities and public corporations to go bankrupt, and it could rewrite its constitution to enable it to invest.

Many Puerto Ricans know this. They have tried to get statehood. In 2012, Puerto Rico held a referendum on the issue. 54% of Puerto Ricans voted to change Puerto Rico’s status, and 61% of those 54% voted for statehood (33% voted for “free association” and 5% voted for independence). The Puerto Rican legislative assembly responded by enacting a concurrent resolution demanding that the federal government begin the process of admitting Puerto Rico as a state. But congress did nothing–proposals to begin admitting Puerto Rico died in committee. It was argued that the 2012 referendum did not produce a sufficiently clear result (61% of 54% is not a majority for statehood). No doubt some Republicans were reluctant to support the bid because Puerto Rico would be quite likely to regularly deliver two Democrats to the senate. Instead, congress passed the Puerto Rico Oversight, Management, and Economic Stability Act (PROMESA), which put a seven-member board in charge of Puerto Rico. This board imposes relentless austerity on the territory. Puerto Ricans call it “the junta”. President Obama signed this bill and is complicit in the suffering of these people.

Undaunted, Puerto Rico decided to hold another referendum to get a clearer result that would be harder to ignore. This time 97% of Puerto Ricans voted for statehood, but on a turnout of just 23%, after the pro-status quo Popular Democratic Party staged a boycott. Because of the boycott the result will likely once again be dismissed as too ambiguous.

We don’t have time for this. Puerto Rico is in deep pain, and has been for a decade, and statehood is the best way to free Puerto Rico from the unreasonable constraints it faced even before a series of monster hurricanes devastated the island and its infrastructure. We could give the territory a federal bailout, but that would just be a temporary fix–the truth is that Puerto Rico has long trailed the rest of the United States on far too many economic indicators. 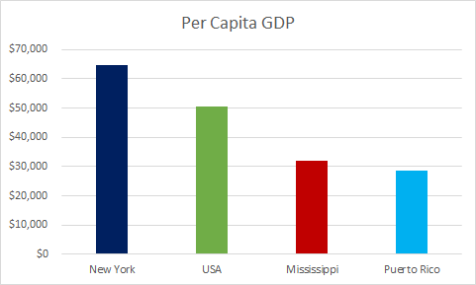 Puerto Ricans are American citizens and they ought to be entitled to the same deal other Americans get. It may be a long time before Puerto Rico rides in first class with New York, but it should at least be allowed to cram itself into the middle seat next to Mississippi. We can’t keep them waiting on standby forever, and the sooner we get them a seat on the plane, the sooner we can get them in the air.

And while we’re here, don’t forget about the other American territories devastated by the recent storms, like the US Virgin islands, birthplace of San Antonio Spurs legend Tim Duncan:

The VIs aren’t quite as poor as Puerto Rico, but they’ve also been in recession for a decade and need our help too:

The VIs have a debt of $2 billion on a GDP of about $3.7 billion, a debt to GDP ratio of around 53%, and the money-lenders are already baying for the blood of these put-upon people. With a net worth of $150 million, there’s only so much a single NBA superstar can do. The Virgin Islands have a population of about 103,000 people. When Wyoming became a state in 1890, it had just 62,000. Why have 51 states when you can have 52?