When it Comes to Sanctions, Both Democrats and Trump are Inconsistent

Toward the end of his presidency, Barack Obama began relaxing economic sanctions on Cuba. The argument was simple–the sanctions had been in place half a century, but there was no hard evidence that they were affecting Cuban policy or seriously encouraging regime change. It seemed to many that the sanctions just made ordinary Cubans worse off and enabled the Castro regime to blame America for economic setbacks. Why not flood Cuba with American goods and American culture instead, and try to win the Cuban people over with goodies? The Trump administration never liked this idea, and it immediately set about reinstating the barriers. But now many of the same people who enthusiastically supported Obama’s efforts to change policy on Cuba–including many Senate Democrats–are calling for Trump to perpetuate and intensify sanctions against Russia, and Trump is reluctant to go along. This is intellectually inconsistent–on both sides. It reveals that when it comes to sanctions, both the Democrats and Trump are more interested in scoring political points at home than they are in having a coherent foreign policy.

The story in both the Cuban and Russian cases is quite similar–the United States wants a set of policy changes, it employs sanctions in a bid to force the country in question to change its policies, and that country takes the economic punch without giving political ground. Cuba has not become a bastion of political freedom and Russia has not given Crimea back to Ukraine, and there’s no obvious indication that either of these things is on the horizon. Reporters Without Borders still ranks Cuba 173rd out of 180 for press freedom (significantly worse than Russia, which ranks 148th, but not as bad as China, which ranks 176th yet trades up a storm with America). Meanwhile the Russian Foreign Ministry continues to reiterate its position:

We’re not returning our territory. Crimea is part of the Russian Federation.

The sanctions have had no effect on Putin’s domestic political position–at the 2016 Russian legislative elections, his party, United Russia, increased its vote share from 49% in 2012 to 54%. Putin polls well above 60% in polls concerning the next Russian presidential election, in 2018, and he remains the most trusted politician in Russia by a wide margin, more than 30 points ahead of the runner up. His approval rating is over 80%. The last time an American president had an approval rating that high was early 2002, in the wake of 9/11. Putin is under no serious political pressure to give ground on Ukraine and we have no reason to expect him to do so, even though the Russian economy continues to suffer:

With Putin is gaining seats under these pathetic economic conditions, it’s clear that he’s not being held responsible for them by the Russian people–they are blaming the United States. The Russians are very satisfied with the way the government is handling the United States and Ukraine specifically:

More Russians than ever are happy with the direction of the country:

The regime is enormously popular:

The Democrats saw the force of this argument on Cuba, but they reject it on Russia because many of their supporters want to signal disapproval toward Russia, in part because they don’t approve of the Russian intervention in Ukraine and in part because they want to stick it to Russia for meddling in the 2016 election. Many Democratic voters are feeling retributive toward Russia and want to hurt the country even if this accomplishes nothing (other than making the Russian people even worse off). It’s a policy motivated by vindictiveness, and the party is happy to pander to the feelings of its supporters.

By the same token, Trump saw the force of this argument on Russia, but he rejects it on Cuba because so many Republicans want to signal disapproval toward the Castro regime, in part because they don’t approve of its human rights record and in part because they want to stick it to Cuba for daring to embrace socialism and the Soviet Union during the Cold War. These Republican voters are feeling retributive toward Cuba and want to hurt the country even if this accomplishes nothing (other than making the Cuban people even worse off). Again, the motivation is vindictiveness, and Trump is happy to pander to it.

I’m not here to claim that sanctions never work or that we should never use them–they played a major role in breaking the back of the Apartheid regime in South Africa. But whether sanctions succeed or fail will depend on the way foreign political forces interpret them, and it often becomes clear fairly early on whether the regime will be able to deflect blame back onto the west.

Once that happens, a vicious cycle develops in which the misery we inflict on the people of a country only serves to strengthen the regime we don’t like. The regime catches on that antagonizing us helps keep its own supporters united. In the meantime, American political parties start using sanctions to rally their own bases. And if an American party doesn’t support our vindictive, purposeless sanctions, if it doesn’t disapprove hard enough of these bad regimes and all the bad things they do, we accuse it of being soft, perhaps even traitorous. So channeling and expressing the public’s disapproval becomes a political necessity for our parties, even if this means making poor people in foreign lands even poorer. And so even as the sanctions continue to fail in their stated purpose, they take on another–helping American political movements prove to the public how tough they are: 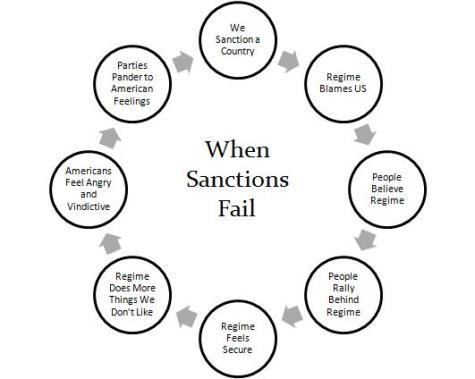 Meanwhile, the poor and working people of Havana and Moscow pay the cost of this economic saber-rattling. Maybe instead of virtue signalling to each other we should think about them?