Suburban Decay: A Theory of Decline in Towns

Some years before I was born, my parents lived in Michigan City, Indiana. But this was only briefly–before too long, they ended up in Valparaiso, the town I grew up in. Since 1970, Michigan City’s population has fallen by a quarter, while Valparaiso’s has increased by a third. Today Valparaiso has more people than Michigan City does, and nearby Chesterton’s population has doubled its 1970 level. Another nearby town, LaPorte, has stagnated: 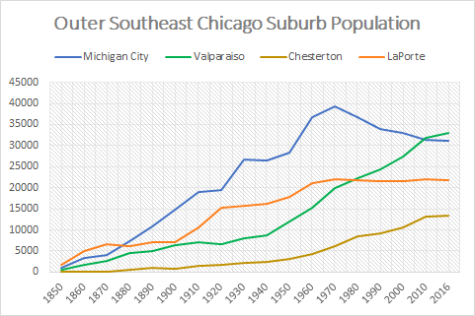 Why do Valparaiso and Chesterton grow while Michigan City and LaPorte decline or stagnate? I’ve been thinking about it, and I have a theory.

I’ll start with a few qualifications–the online data on individual towns is often much less comprehensive than data on nations and states. This isn’t to say this data doesn’t exist. Individual municipal governments often have a lot of research done when they undertake major decisions. But because the number of people affected is smaller, the quantity of research is smaller and the media coverage of the research that is done is much less comprehensive. Because of this a lot of figures that might help establish whether my theory is true or false may not exist or may not be readily available with a quick Google search. Most crucially, the law that created Indiana’s standardized testing system wasn’t passed until 1999, and that means that it’s hard to quantitatively compare the towns’ school systems to one another in the 80s or 90s. Most websites that rank schools are only really interested in their performance today and don’t bother contextualizing their data. So a lot of this theory will be just that–a theory–and I’d be interested to hear from anyone with data on that would confirm or disconfirm it.

Let’s start with a basic generalization. For the most part, old people don’t retire to the Chicago suburbs and young people don’t move to them for the nightlife. There are primarily two reasons why you would choose to live in one of these towns for an extended period:

If your town has good jobs, those good jobs will attract middle class workers, and those middle class workers will pay the property taxes that fund the schools. Good schools will attract commuters, and commuters will pay more property taxes and increase consumer demand, and that further strengthens the schools and the local job market. A strong town is a great big virtuous circle:

A town’s success is threatened whenever this cycle is disrupted, and there are many things that can disrupt it. Michigan City relied too heavily on the steel industry to provide strong manufacturing jobs. When those jobs disappeared due to a mix of outsourcing and automation, it lost too much tax revenue. Too many people moved away, and land values fell, reducing the property tax take from those properties that remained occupied. When a town loses manufacturing jobs, it loses the consumer demand those workers generated, damaging the service sector too. Without the necessary revenue, the schools can’t stay competitive, and as they decline the commuters bail too, making a bad situation even worse. In Michigan City’s case, those that worked closer to Chicago could happily move to Valparaiso or Chesterton anyway–it’s in LaPorte county, while Valparaiso and Chesterton are in Porter: We can see how the cycle has broken in Michigan City. Median home values there are now much lower than in Valparaiso or Chesterton, making the per capita property tax take much smaller:

In Indiana, school districts can only raise money with the property tax, and the top rate of property tax is capped by state law. The only way they can raise more money is by passing a special referendum. In 2013, Michigan City tried to raise a little bit of extra money for the schools–the increase would have cost the average homeowner a bit more than $50 per year. But the people in the town voted it down, 57% to 43%. The schools there aren’t competitive with the other schools in the region, and middle class parents who can afford to raise their kids somewhere else will do so. Many of those who remain in Michigan City either don’t have the cash to spare or don’t care: 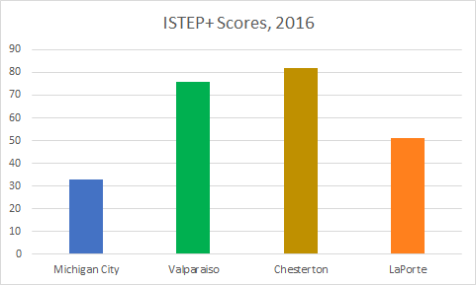 Could it happen to a place like Valparaiso or Chesterton? At first glance, these towns look more secure than Michigan City ever was. They don’t heavily depend on steel and that makes them less vulnerable to economic disruption. If the Valparaiso and Chesterton economies are hurt, it will likely be because the whole region is hurting–it’s doubtful that they’d get badly hit in a way that wouldn’t also hurt Michigan City and LaPorte.

But because these cities aren’t dominated by manufacturing, their service sectors rely more heavily on residents who commute to bring in money from other places. Valparaiso gets a little bit of help from Valparaiso University, but with just 220 academic staff and 4,500 students, VU can’t support the town on its own the way steel once supported Michigan City. The town needs outside money. If the commuters were to leave, these towns would be in trouble. What could force them out? A shock to the schools.

Under governors Mitch Daniels and Mike Pence, Indiana has reduced school funding. Between 2011 and 2016, state education spending has fallen by about 11.5% relative to GDP. This has pushed Indiana teacher salaries down, moving it from a midlevel state to one of the worst states in the nation for teacher salaries:

In combination with falling property values after the housing bubble burst in 2008, the state-level reductions strained Valparaiso’s budget and forced emergency cuts in 2012. A similar crisis afflicted Chesterton. Chesterton responded by immediately launching a referendum to raise property taxes. It passed by the slimmest of margins, 51% to 49%. Valparaiso delayed, and many of its most experienced and beloved teachers were gently pushed into early retirement with incentive schemes so that the district could hire young, inexperienced, and–most importantly–cheap teachers. It wasn’t until 2015 that Valparaiso finally passed a referendum, by a 2-1 majority. Valparaiso is spending a lot of that new money on infrastructure. The early retired teachers aren’t coming back, and the institutional knowledge they left with can’t really be replaced. Valparaiso hasn’t fully recovered the dominance it enjoyed in the mid-00s, and Chesterton has finally managed to slip ahead of it:

LaPorte’s scores have declined in absolute terms, but it’s much more competitive in relative terms than it was 10 years ago. And while Michigan City is still far behind, it’s pulled itself out of the basement and made up significant ground. Valparaiso and Chesterton historically maintained their edge in part by hiring experienced, highly skilled teachers away from neighboring districts. Many of those teachers would rather teach middle class kids with heavily involved parents. Valparaiso and Chesterton traditionally supply those kids in spades. Michigan City does not. But what if Valparaiso spends most of its new tax revenue on buildings and never bothers to reinvigorate the teaching stock? Any lasting decline in the schools would break the town’s engine of growth, eventually visiting deterioration and decay on every sector in the town, turning a virtuous circle into a vicious cycle. A declining tax base would make it impossible to maintain the beautiful parks and infrastructure constructed by Valparaiso’s city government. The longer this went on, the more concerned middle class parents would leave, and the harder it would be to pass another property tax referendum to find money to restore the schools. As land values fell, increasingly the town would be left to its low income residents, slowly turning into a graveyard of suburban dreams–not unlike Michigan City.

In the meantime, the good teachers in Michigan City would be left to stay there, giving it a bit of a boost. Perhaps that’s part of why it’s made gains since the recession and the state budget cuts–with Valparaiso and Chesterton less able to poach than usual, perhaps Michigan City has been able to keep more of its top talent.

If Valparaiso fell apart, where might departing middle class families go? They might move to another town in Indiana, or, if the state’s education policies eventually cause all of the schools to continually lose ground, they might bite the bullet and relocate to a state with higher taxes and stronger public services, like Illinois. Many of the commuters who came to Valparaiso and Chesterton grew up–as both my parents did–in Illinois. If the schools in the wealthy suburbs on Chicago’s north side (we call it “the North Shore”) become dramatically better than even the best schools in Northwest Indiana, ex-Illinoians might return, and others might follow. Every now and then, my mother wonders–should we have moved to the North Shore?

And what of the poor, the real losers in all of this? Because towns in Indiana need property taxes to fund their schools, they have to make it their goal to price low income residents out of the local housing market. That means that poor Hoosiers have to go to whichever town they can afford to live in, which means they tend to end up in the weakest districts, where the small amounts of property tax they pay only allow their schools to deteriorate further.

No town in Indiana wants to end up being like Michigan City. The state funding model pits all of these communities in a hunger games competition to avoid being saddled with the poor residents who can’t afford to pay enough property tax. As real wages and real household incomes in America and in Indiana stagnate, it becomes harder and harder for towns to end up on the right side of an educational and economic iron curtain. The key to staying on the right side these days? Keep the commuters. Maintain the schools.