There’s a single payer plan advancing in the state of California, and many people are excited about it. And for good reason–a single payer system can potentially extend coverage while cutting costs. I’ve written about the virtues of single payer many times before, but there is a political danger in attempting to do single payer at the state level. Ironically and tragically, the very economic forces which make single payer such a good federal policy create powerful dangers for state systems.

The private system in the United States wastes huge amounts of money. To show just how bad it is, I like to use a figure I call the “healthcare efficiency rating” or “HER” for short. It’s relatively simple–we just divide a country’s life expectancy by its total healthcare spending as a percent of GDP. Among rich countries, the United States ranks dead last in HER, and it’s not close:

America is in red. The green countries use single-payer, and the blue countries use hybrid systems which contain large public components. Overall, the single payer systems are the most efficient:

Because the American healthcare system is so inefficient, we spend a much larger percentage of our GDP on healthcare than countries with single payer do. Healthcare spending in the US is about 17% of GDP. In Britain it’s 9%. Yet in the United States, average life expectancy is 79.3 while in the UK it’s 81.2. The Brits aren’t just getting more lifespan for their money–they’re getting more lifespan, full stop.

Single payer cuts costs by giving the government a monopoly on demand. Because the state negotiates on behalf of all patients, it can more or less dictate prices to doctors, hospitals, and drug companies. Usually countries with single payer manage their costs by listening to patients–if patients feel that the quality of the service is poor, they can vote in parties that pledge to increase funding. If patients feel that the service is costing taxpayers too much money, they can vote in parties that pledge to force costs down. The left and the right in European countries often act as a yin-yang on healthcare–the left stops the right from destroying the service and the right stops the left from allowing the service to grow fat and inefficient. Single payer is so inexpensive because when the government decides to reduce the cost of the service, it changes compensation for everyone in the healthcare sector and leaves them with no where to go.

The American healthcare system is very fat and inefficient and there is much room for cost-cutting. For instance, because American drug companies receive entirely too much money, they have lots of extra cash to waste on advertising–far more than what they spend on medical research:

In theory, if the United States were to create a federal single payer system like Britain’s and cut healthcare spending to 9% of GDP, it could save $1.4 trillion every year. That’s more than $14 trillion in the first decade, without including inflation or economic growth, both of which would raise that figure. The thing is, these cost savings are so immense that if we did this all at once we’d create tremendous disruption in the healthcare sector. In addition to wiping out the $800 billion health insurance industry and its 450,000+ jobs, we’d also cut some of the 12.4 million healthcare jobs and reduce compensation for the rest. So in practice, a federal system might instead reduce healthcare costs gradually. Instead of forcing compensation down to European levels immediately, we might hold down the rate at which healthcare costs grow below the rates of growth and inflation until at some point, some years down the line, we’d achieve a competitive spending percentage and HER. This means that a federal single payer system might initially cost a trillion dollars more than is really necessary, as we slowly transition the healthcare system to a lower compensation, higher efficiency model.

Fortunately, the federal government doesn’t need to collect all that tax money. Because of its tremendous ability to borrow large sums of money, the feds can cover some of it with borrowing. The IMF calculates that the United States can safely borrow an additional 165% of GDP before it runs out of “fiscal space”. That’s about $30 trillion dollars.

If we aimed to reduce healthcare spending to 12% of GDP in the long-term, we could raise that 12% ($2.1 trillion) in taxes while covering the remaining 5% ($890 billion) with borrowing in the first year. Some of the taxes we’d need are already on the books–the government already raises revenue to fund spending equivalent to 8.3% of GDP, which goes mostly to Medicaid and Medicare. So with a 12% target, new taxes might only amount to about 3.7% of GDP, or $660 billion. Each year, we could trim the fat a bit, gradually decreasing the sum we borrow until it reaches zero. We’d come nowhere close to reaching our fiscal limit. Along the way, American families and businesses would feel significant economic relief–most people’s tax burdens would be significantly smaller than their current premiums. They’d have more to spend on other things, and other sectors of the economy would grow, generating new jobs.

It’s a major undertaking, but it can work for two key reasons:

What goes wrong when a single state tries to do single payer? Well, a single US state has problems in both these areas. Many individual US states have balanced budget amendments, preventing them from borrowing large amounts of money to facilitate a gradual transition. Even the ones that don’t have balanced budget amendments would struggle to get access to the kind of credit available to the federal government. And crucially, individual US states cannot exercise a true monopoly on demand. If one state tries to slash healthcare spending significantly, its best doctors can simply run to neighboring states, producing doctor shortages and reducing quality of care. This makes individual states afraid to use the cost-cutting leverage which single payer gives them. If they don’t use the cost-cutting leverage and don’t borrow money, they have to raise taxes high enough to cover healthcare spending which will support a national spending figure of 17% of GDP. This means that they end up raising much more tax revenue than the Europeans do to continue propping up a healthcare sector which is too big to fail. This prevents citizens from getting the healthcare relief we promise them–their premiums disappear, but their taxes rise too much for them to get the full benefits of single payer.

In the long-run, people are unlikely to continue to support that kind of system, and when they give up on it the right will attempt to use the failure as evidence in national debates about single payer, even though the policy is much more workable at the federal level. There is no other rich democracy American doctors can emigrate to which will pay them the extraordinarily bloated wages they receive in the United States. For the feds, it’s simply a question of whether they prefer to borrow a lot of money facilitating a gradual transition or to profoundly disrupt the healthcare sector to save Americans huge amounts of money very quickly.

In sum, the hardest thing about single payer is the fact that it’s replacing a system that has accustomed millions of people who work in the healthcare sector to unrealistic and unsustainable levels of compensation. If we cut their pay to reduce costs and give them somewhere to run, they’ll run. If we cut their pay very quickly, we’ll produce a significant increase in unemployment and disrupt many people’s lives. If we cut their pay gradually, we need to be able to borrow money in the short-term to avoid raising taxes too much. The federal government has the resources and the potential market power to get these things done. The states don’t. It’s hard to wrap our heads around just how wasteful our healthcare system is. It’s a problem that is far too big for any one state to handle. We need the feds–without them, we risk handing the right undeserved propaganda coups, enabling the private system to go on flushing our hard earned money down the drain.

A few people have asked about Canada, which introduced its healthcare system at the provincial level initially. The difference is that Canada did not introduce single payer to lower costs. Its private system was not terribly inefficient–the problem was that it did not cover everyone and the provision for those covered was not good enough. So Canada used single payer to increase the size of its healthcare sector rather than decrease it. Canadian healthcare spending was 6% of GDP in 1960 and rose to 10% by the mid-00s. The American private system did not become much less efficient than other countries’ until the 1980s: 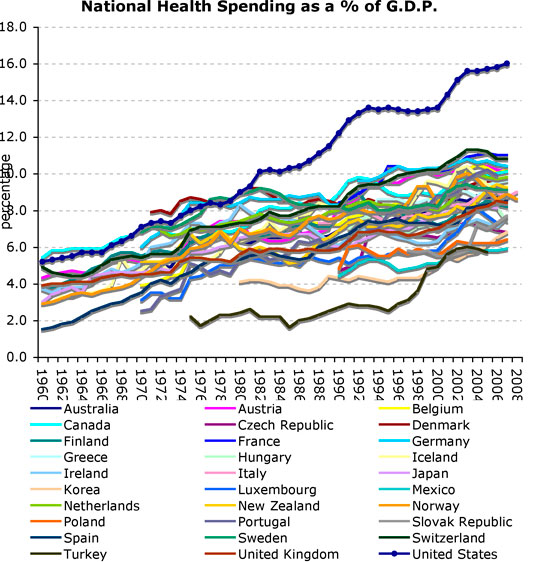