The Vice Presidential debate last night between Tim Kaine and Mike Pence was a sad affair–Pence was able to “win” the debate without knowing any policy by repeatedly attacking Clinton’s record while only vaguely referencing policy issues. Rather than force Pence to defend his vague policy assertions, Kaine relied on a variety of canned talking points, many of which were personal attacks on Trump that moved the conversation away from the issues (Kaine repeatedly referenced my 5 bad anti-Trump arguments instead of my 5 good ones). This made Kaine look like he was running from policy, allowing Pence’s assertions to go unchallenged and giving Pence command of the room. Pence was able to accuse Kaine of running an insult-driven campaign, and Kaine’s response to that was to petulantly interrupt, get defensive, and resort to more insult-driven talking points, all of which reinforced Pence’s point. There were many claims Pence made that were open to attack, but I want to focus on one in particular today–Pence eliminated the major policy difference between his campaign’s and Kaine’s on Syria, and in so doing he eliminated the foreign policy case for Trump.

When it comes to Syria, there are really only three core approaches that you’ll see different American politicians favor:

Most American politicians have two core objectives in Syria–they want to remove President Assad, a strong ally of Iran, and they want to defeat ISIS. The priority you give to these two objectives and the means you’re willing to use to achieve them determine which approach you favor. 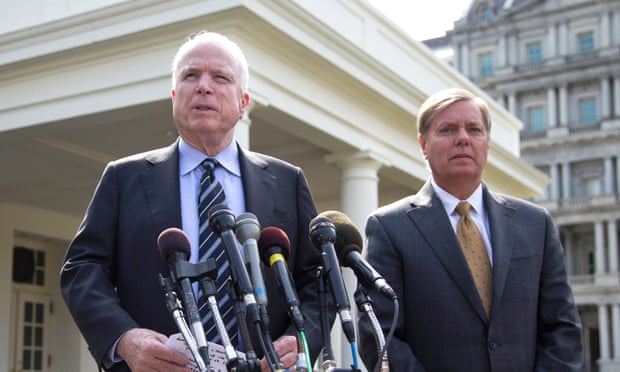 He wants to get rid of Assad and ISIS at the same time, and he wants to do that by sending an Arab coalition into Syria with at least 20,000 American ground troops. He wants a no-fly zone in Syria, even though the Russians object to that and are currently flying bombing missions there to help Assad. There are big risks with a no-fly zone because if the United States imposes it without Russian cooperation the Russians might refuse to respect it. If they defy the no-fly zone and we shoot down Russian planes, that could lead to war. The Russians categorically oppose a no-fly zone, because they believe it will be used to oust Assad in the same way the no-fly zone in Libya was used to oust Gaddafi. However Graham’s plan does have one key advantage, which is that it provides for a ground army to take and hold the territory we pry lose from ISIS. The trouble is that Graham’s plan calls for 90% of the troops in this army to come from other countries in the region, and so far regional powers have been immensely reluctant to agree to that kind of commitment. So in practice Graham’s plan might result in a much larger American troop commitment than he readily admits, which would be expensive and could lead to a prolonged occupation, similar to what happened in Iraq. Nevertheless, this plan has a lot of support from Republican hawks and neoconservatives from the Bush era.

Clinton also wants to remove Assad and defeat ISIS at the same time, and she also supports a no-fly zone that raises the risk of a war with Russia. The difference between her plan and Graham’s is that Clinton does not support an American troop commitment. Instead she wants to arm and supply Syrian and Kurdish rebel groups. Some of these groups are themselves hostile to the United States and there is little evidence to suggest they are prepared to take and hold sufficient territory for this plan to work. The most powerful rebel groups are not moderate by any stretch of the imagination, and the plan could replace both Assad and ISIS with some other radical group, like the Al-Nusra Front. As was the case in Libya, where Clinton pushed for the elimination of Colonel Gaddafi through a no-fly zone (which the Russians regarded as illegal), Clinton wants to eliminate major players in the region without a clear plan for what comes next. This is very likely to result in a new power vacuum and more violence (Libya’s per capita GDP has collapsed and it’s been mired in civil war for years–when criticized about this, Clinton responds by blaming the Libyan people). It’s a weak plan, but it appeals to Americans who don’t like the Graham plan because Clinton’s plan doesn’t require any American troops and Graham’s does. President Obama has repeatedly refused to go along with Clinton on this–while he has armed some rebel groups, he has kept his commitment relatively small and he has declined to impose a no-fly zone. It’s sometimes forgotten, but Clinton is much more of a hawk than Obama, which is why she supported the Iraq War at the time and he did not.

Unlike Clinton and Graham, Carter thinks it’s much more important to stop ISIS than it is to immediately remove Assad, and that means he’s much more willing to cooperate with the Russians. Carter wants us to pursue a lasting ceasefire between Assad and the non-ISIS rebel groups. By putting a stop to the instability in the country, Carter would enable all factions in Syria to focus on eliminating ISIS and negotiate a sustainable long-term plan for political transition that all the players are comfortable with.

Bernie Sanders and Donald Trump both supported this kind of plan during the primary campaign. Sanders said:

I think we do have an honest disagreement: in the incredible quagmire of Syria, where it’s hard to know who’s fighting who and if you give arms to this guy, it may end up in ISIS’ hand the next day. And we all know–the secretary is absolutely right–Assad is a butcher of his own people, a man using chemical weapons against his own people. But I think in terms of our priorities in the region, our first priority must be the destruction of ISIS. Our second priority must be getting rid of Assad, through some political settlement, working with Iran, working with Russia. But the immediate task is to bring all interests together who want to destroy ISIS, including Russia, including Iran, including our Muslim allies to make that the major priority.

The United States of America needs to be prepared to work with our allies in the region to create a route for safe passage and then to protect people in those areas, including with a no-fly zone.

Once you’re for a no-fly zone, you are totally rejecting dealing with the Russians, and that takes the Carter plan off the table. Trump and Pence have not committed to ground troops in Syria, which means we have no reason to believe they’ve embraced the Graham plan. That leaves the Clinton plan–Pence gave every indication last night that the Trump solution to the Syrian conflict is identical to Clinton’s.

Tim Kaine could have pounced on this tremendous concession, but in his incompetence he responded with a series of canned talking points that had nothing whatsoever to do with the issue at hand:

I’ll close with a little chart that helps break down how the different Syrian strategies work: