Hillary Clinton is like Katniss Everdeen in The Hunger Games

When I watched the third democratic debate, I was amused and horrified with the way Hillary Clinton defended the decision to intervene in Libya:

…we have to continue to do what is necessary when someone like Gadhafi, a despot with American blood on his hands, is overturned.

This is precisely the same way that George W. Bush continues to defend the Iraq War:

One thing is certain: The Iraqi people, the United States and the world are better off without Saddam Hussein in power

On these accounts, overthrowing dictators is the right decision because dictators are bad, and we should get rid of bad people. This reminds me way too much of the plot of The Hunger Games: Mockingjay Part 2. Spoilers for that movie follow, if you care about such things.

The Hunger Games depicts a country that is very similar in important respects to Iraq, Libya, or Syria–it is a highly extractive society in which the leader and the leader’s faction extract resources and wealth from the rest of the country breeding resentment over time. Eventually, the suppressed subgroups rise up against the autocrat’s faction. Their primary objective is to kill the autocrat and seize power. But once they do this, the rebels begin to splinter between two distinct subgroups–moderate liberals who want a free society that includes the previous ruling faction in an equal capacity, and extremists who want to create a new extractive regime to reverse past injustices. Generally the moderate liberals are an educated minority, and in these societies the majority of the formerly subject peoples are likely to be uneducated and consequently they are more likely to seek retributive justice. Consequently the extremists are more likely to have the upper hand unless the society has a large educated middle class (e.g. Tunisia). 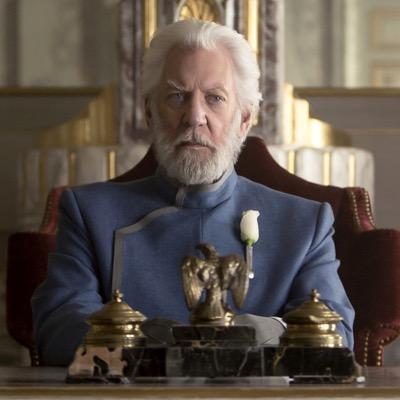 But while Katniss helps the districts, she is not their political leader–that’s Julianne Moore’s Alma Coin:

After the war, Coin proposes to make the capital contribute people to fight in a new Hunger Games tournament, indicating her intent to build a government that reverses the extraction and subjugation of Snow’s. The parallels are striking:

In Iraq, Libya, and Syria, weakening or eliminating autocrats has allowed extremists to seize territory and power. These extremists range from merely bigoted against the previous ruling faction (e.g. al-Maliki) to downright genocidal (e.g. Islamic State). They all share a commitment to the politics of extraction, and in this respect they are no better than the dictators they replaced. Inevitably these new extractors come to be viewed by the deposed factions as illegitimate. When enough time passes, we see this come full circle–in Iraq, the Shiites that took power from the Sunnis have now themselves become subject to rebellion from Sunnis who view the current Iraqi government in the same way that the Shiites once viewed Saddam Hussein.

We should give The Hunger Games credit for realizing that after the dictator is gone, there are inevitably people who want to create new extractive regimes that extract in different directions. But The Hunger Games is teen fiction–it needs a happy ending. Like Iraq, Libya, and Syria, Panem has an extractive political history. How do we get people out of the extractive mindset? Unfortunately, The Hunger Games can’t seem to figure this one out. Its solution is to just have Katniss kill Alma Coin too and put a bow on it by claiming that a democracy with free elections will just spontaneously emerge out of that.

In this way, The Hunger Games makes the same gross over-simplication that politicians like Clinton and Bush make–they mistake individual leaders for the socioeconomic and political forces that those leaders represent and channel. Like Hillary Clinton, Katniss Everdeen tries to create a free society by finding the bad people and killing them. If killing the dictator doesn’t suffice, kill the extremists who come after him. Kill Hussein, Gaddafi, and Assad, and then kill the leaders of the Islamic State, too.

Here’s the wisdom that Clinton, Bush, and Katniss are all missing–you cannot create a free society by killing the bad people. To create a free society, you need the underlying socioeconomic and political forces in your society to line up in the right way. That means you need a large educated middle class that has confidence in the potential of free institutions and repudiates retribution and extraction not merely when they are the victims of it, but in principle. Tunisia had all the things that are missing in countries like Iraq, Libya, and Syria.  80% of the Tunisian population was middle class at the time of that country’s revolution in 2011. In Syria, that figure is closer to 38%. If you don’t have the requisite ingredients, one extractive regime can only be followed by another extractive regime that works in a different direction. This may be valuable nonetheless to the people who stand to benefit from their faction no longer getting the pointy end of the stick, but it does not constitute a step forward for the political development of the society as a whole. There is an immense amount of political science democratization literature that details the kinds of conditions necessary for democracies to successfully emerge in developing countries. Has Hillary Clinton read any of it?

In the democratic debate, Bernie Sanders made this point:

I think — and I say this with due respect — that I worry too much that Secretary Clinton is too much into regime change and a little bit too aggressive without knowing what the unintended consequences might be.

…you know, with all due respect, Senator, you voted for regime change with respect to Libya. You joined the Senate in voting to get rid of Gadhafi, and you asked that there be a Security Council validation of that with a resolution.

The resolution Clinton refers to was not an authorization for the use of force against Libyan ground troops. Here’s the non-binding action it called for:

Urges: (1) the Gadhafi regime to abide by Security Council Resolution 1970, and (2) the Security Council to take such further action to protect civilians in Libya from attack, including the possible imposition of a no-fly zone over Libyan territory.

Hillary Clinton eventually got a UN resolution permitting a no-fly zone, but she quickly went well beyond what that resolution stipulated, bombing Gaddafi’s ground troops. Gaddafi had been winning the war, but with the coalition bombing his ground troops his gains were reversed and his regime quickly collapsed. This horrified many people at the time. Republicans rightly pointed out that congress never voted to bomb Gaddafi’s ground troops. In The National Review, Andrew McCarthy wrote:

While Secretary Clinton has continued to refer to S. Res. 85 as a Senate endorsement of the President’s establishment of a no-fly zone, I’d like to point out to the American people that this talking point is very misleading. Senate Resolution 85 received the same amount of consideration as a bill to rename a post office; it was ‘hotlined’ and there was no debate allowed on this issue and no legislative language provided to consider.  There was no vote. S. Res. 85 described a no-fly zone as a “possible” course of action for the U.N. Security Council’s consideration.  It did not instruct the U.S. Ambassador to the United Nations to take action, let alone authorize a military operation. Using the hotline process for S. Res. 85 as a congressional endorsement for the President’s policy is simply not an adequate use of Congress’ role in authorizing military action.

The Russians were furious to see Clinton go beyond the terms of the resolution they voted for. Russian Foreign Minister Sergei Lavrov said this:

Today we witness that some NATO actions in Libya are exceeding the framework defined by the UN Security Council. It is already being discussed that UN Resolution 1973 could also be used for ground operations. The resolution does not provide for such actions and does not approve them, nor does the UN deal support regime change in Libya.

No doubt this history of deceit has made the Russians considerably less willing to trust the Obama administration when dealing with Syria and the Islamic State today.

But why should we expect anything less from Hillary Clinton? She ignores the democratization literature and instead gets her foreign policy from teen flicks. Regime change republicans like Marco Rubio and Jeb Bush are often and rightly mocked for their simplistic understanding of democratic transitions. But in this area Hillary Clinton is little better and does not offer reasonable or robust policy alternatives. Like the Bushes, Clinton prefers to emphasize that the dictators she helped kill were bad guys and claim that her critics believed the nonsense she was hawking at the time, as if this were some sort of excuse for her extreme naivete. If Clinton wins in 2016, teen flick foreign policy is here to stay.