Canada has a federal election on October 19. Back in August, I wrote a post detailing why Stephen Harper needs to go–his austerity program and fixation on developing Canada’s mineral resources have resulted in chronic under-investment in Canadian infrastructure and social programs, and they have resulted in an unnecessary recession. But the Canadian election is a three horse race. Should Canadians choose the New Democratic Party (NDP) or the Liberal Party? Over the past month and a half, I’ve been pondering this quite a bit. Both the NDP and the liberals have interesting policy ideas, and there are good arguments to be made on both sides. But ultimately, I think that if you are going to vote in the Canadian election or know someone who is, the liberals are the better choice. Here’s why.

In recent weeks, the NDP has begun to flame out and the liberals have begun to take the lead: 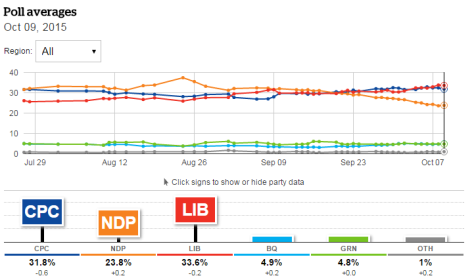 Canada still operates on a first-past-the-post voting system, which means that it is very possible that the conservatives will win some seats with minorities, taking advantage of splits in the opposition. It is easy to imagine scenarios in which a Tory wins a seat with 40% while the NDP and liberals each get 30%. In a district like that, the conservatives would be able to retain the seat even though a clear majority opposes them. Unless and until Canada switches to the alternative vote or proportional representation models, this means anti-Harper voters should vote tactically for whichever opposition party is larger in their district. If the liberals have only a marginal presence but the NDP stands to potentially take or hold a seat that might otherwise go to the conservatives, an NDP vote makes sense.

But what about seats where both the NDP and the liberals are competitive? One reason to support the liberals in those cases is to ensure that largest opposition party gets as many seats as possible. Since the liberals are projected to win more seats than the NDP, supporting the liberals is more likely to bring about a new government with a governing majority. At present none of the parties are projected to win a majority, so the closer the leading party gets to a majority, the less unstable a potential minority government would be.

But what if we put tactical considerations to one side? If the liberals and NDP are both competitive, what are the policy differences between the two? The NDP, to its credit, has some great ideas and stances:

If the NDP were elected, it would be a considerable improvement over the Harper government, and when I began my research on the two opposition parties, I was leaning their way. The problem with the NDP is their unnecessary fixation on running budget surpluses. This obsession, which mirrors Harpers’, sucks all the wind out of the NDP’s policy ambitions. By committing to surpluses, the NDP ensures that if its tax policies do not produce as much revenue as it anticipates, it will back off on its spending commitments rather than run deficits. This would do unnecessary harm to the Canadians who would otherwise stand to gain so much from the NDP’s spending commitments. As fiscal policy, it is also grievously irresponsible for two reasons:

This may all seem a bit counter-intuitive, but hear me out. When we consider a country’s fiscal position, the important figure is the debt to GDP ratio, which reflects the size of the total amount of debt relative to the size of the economy as a whole. Bigger economies can handle more debt than smaller economies. The deficit is simply the amount by which the debt expands in any given year (and a surplus is the amount by which it contracts).

One of the really cool things about government spending that many people don’t realize is that if you grow the economy faster than you grow the debt, the fiscal situation improves even if government revenue does not increase, because the debt to GDP ratio will fall. Canada’s GDP is $1.827 trillion USD. In recent years, the Canadian economy has typically grown at around 2% per year. This means that Canada can run a deficit that is 2% of its GDP without changing its debt to GDP ratio. That’s a deficit of about $36 billion USD.

But that’s just a baseline–many investments the government might make will have big long-term benefits that will increase Canada’s economic growth rate years or decades from now. So even if in the short term Canada runs a deficit larger than $36 billion, it could very likely generate future growth that would offset it later on. Additionally, if spending boosts Canada’s economic performance and results in an average annual growth rate that is larger than 2%, the size of deficit that can be handled with no immediate short-term worsening of the fiscal position will increase. There have been many times in Canadian history where the growth rate has beaten 2%, most recently in 2011 (2.5%) and 2010 (3.4%).

But wait, it gets better. If Canada runs a little bit of inflation, that inflation will slowly shrink the real size of the debt. If Canada were to run a 2% inflation rate (the target set by most central banks), this would effectively shrink the size of the debt by 2% every year. This means that Canada could run a deficit of $36 billion and even see the debt to GDP ratio fall immediately if it also runs some inflation.

By cutting spending, Harper’s government has reduced the GDP growth rate and reduced the inflation rate. These things have both made it more difficult for the debt to GDP to fall. Ironically, running a small deficit can be better for a country’s fiscal health than running a balanced budget or even a small surplus. We can see the effects of Harper’s policy in the debt to GDP figures–despite his big cuts, Harper has been making very little headway against the ratio:

Since 2010, Canada’s inflation rate has struggled to meet the 2% target (let alone the 4% target that some more radical economists have begun suggesting):

Its growth has been anemic too, and recently Canada has been floating through a mild recession:

To turn this around, the next Canadian government must be willing to run at least mild deficits. Because the NDP is not willing to run deficits, it cannot make investments on the ambitious scale required to pull Canada out of its doldrums. Remarkably, Liberal Party leader Justin Trudeau actually made this argument during one of Canada’s debates:

I was flabbergasted–it is very rare to see politicians argue for deficits because the argument can seem so counter-intuitive to voters. Because Trudeau and the liberals understand the need for deficits, they can credibly promise to do more for Canadians faster:

The liberals promise to work with the provinces on child care and to amend C-51. On both of those issues, the NDP’s positions are stronger. But whenever it’s a question of money, the liberals are willing to pony up and the NDP just isn’t. The deficits the liberals promise to run are small–$10 billion a year in Canadian dollars. That’s only $7.76 billion USD, well below the $36 billion that Canada could easily tolerate, without even taking into account inflation and long-term benefits. I’d like to see the liberals do even more spending than they’re promising. But $10 billion is a lot better than zero. When it comes down to it, a chart comparing the amount the parties intend to invest in Canada’s infrastructure says it all: 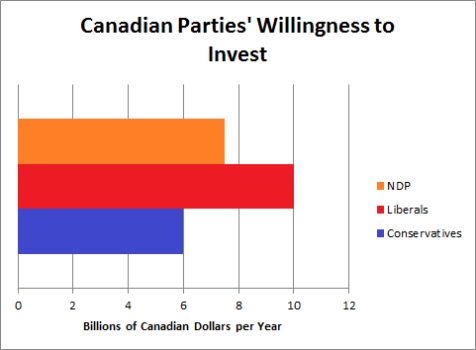 By chickening out on the stimulus issue, the NDP has turned itself from a progressive party into a centrist one. Canadians need a government willing to invest in the future of the nation, willing to openly take a stand against austerity. The liberals are the only ones willing to do it, and they ought to be rewarded with a mandate.

Leave a Reply to Should You Flee to Canada if Trump Wins? | Benjamin Studebaker Cancel reply