Jim Gilmore is a late addition to the presidential race. This means it’s time for one more candidate evaluation. I’ll be looking at Gilmore’s background, policy history, and explicit statements to determine whether or not he would make a good president. I won’t be paying attention to electability or likeability, as is often common elsewhere on the web.

This will be the 22nd candidate evaluation and it may be the last one if Joe Biden chooses not to run. Once it’s been definitively established that this is the field, I will write a post to conclude the series. This will include brief takes on the third party candidates and a full final ranking. In the meantime, you’re welcome to read the other 21 evaluations:

This is Jim Gilmore:

Gilmore got his BA from the University of Virginia. He voluntarily enlisted in the military during the Vietnam War, but he never saw action–he was stationed in Germany (and speaks fluent German). After serving for a few years, Gilmore got his law degree from UVA.  He was a lawyer for many years and was elected Attorney General for Virginia in 1993. In 1997 he was elected governor and served until 2002. Virginia law prohibits governors from running for reelection, so Gilmore only served one term. In 2007, he tried to run for president but dropped out after less than three months in the race due to lack of funds. Later that year he decided to run for senate instead. He was trounced by democrat Mark Warner by a huge margin (65.0% to 33.7%). So Gilmore has only really held a major elected office for 4 years.

Outside of that, Gilmore runs the Free Congress Foundation, a minor conservative think tank. He’s on the NRA’s board of directors and he has done some commentary work for Fox News. He also has a blog.

It’s a small sample size, but let’s see what Gilmore did as governor. Here’s Virginia’s per capita income against the national average:

To start, Gilmore did not do austerity. Indeed, spending was very steady, with no spending increases or decreases under Gilmore that were larger than 0.25% of GDP: 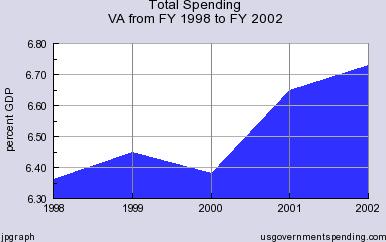 Gilmore cut taxes on automobiles and reduced university tuition by 20%.  He appears to be a Bush-style republican–relatively free spending, but much more conservative on social and foreign policy issues. Here are a few of his other stances over the years:

In Gilmore’s announcement, he makes it clear that he believes his calling card is national security:

He makes no mention of immigration reform or climate change. Gilmore gives foreign policy positions that mirror those of Lindsey Graham yet he seems to believe that these policies are new or different:

I believe we must take immediate action to strengthen our national defense, restore and rebuild our armed forces…

Obama has made a deal with Iran that fails to stop their support of terrorism throughout the Middle East and the world, insures them billions of dollars and modern weapons and fails to block their nuclear program…

On each of these issues, Gilmore misses the mark. The United States still spends far more on defense than Russia, China, Iran, and North Korea combined: 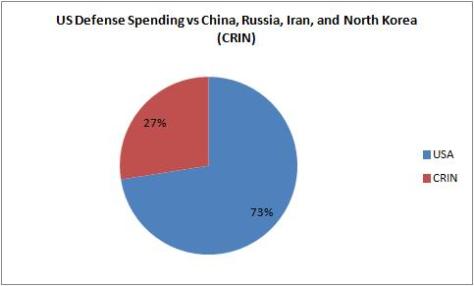 We are far more secure than Gilmore would have us believe. None of these countries would ever willfully enter a war with the United States. Our conventional forces are far superior and we have thousands of nuclear weapons. War with the United States is suicide, and countries do not commit mass suicide. Gilmore claims that other countries no longer fear the US, but this is not true. Russia, China, and North Korea each acquired nuclear weapons not to attack the United States but because they fear US regime change. Iran has pursued nuclear technology for the same reason. Gilmore mistakenly takes these actions to be aggressive, but they are driven by fear of American power. No country or realistic alliance of countries possess the military power necessary to aggressively confront America. Gilmore makes mountains out of molehills. Even Russia’s actions in Ukraine are driven by fear–fear that Ukraine would embrace a pro-western government that would take Ukraine out of Russia’s sphere of influence and potentially turn it into an economic and military satellite of the EU and NATO. Russia acts from weakness, not strength. It has proven unable to maintain its influence in Ukraine by anything less than hard military power. 30 years ago, Ukraine was a core piece of the Soviet Empire. Today Russia must struggle just to hang onto it as a client state. It is weaker than ever before.

China is a more realistic long-term threat, but Gilmore has no new ideas here. Raising defense spending is not going to change the picture. China has a huge population and it is industrializing. If it reaches living standards that are anywhere remotely close to those the average American enjoys, its economy will swiftly become much larger than America’s and theoretically its defense budget will become much more competitive. For this to happen, China must continue growing. It’s possible that Chinese economic growth will derail of its own accord, but if it continues to develop, the only way the US could prevent China from becoming a peer competitor in the next few decades would be by a systematic policy of undermining the Chinese economy. No presidential candidates have proposed anything like that, least of all Gilmore. They believe either that China will stop rising of its own accord or that China will rise in a peaceful and harmless fashion.

Gilmore is half George Pataki, half Lindsey Graham. Like Pataki, as governor, he was pretty harmless, but the economic platform he presently campaigns on is quite right wing. Like Graham, he’s unnecessarily militaristic and fear-driven. He should not be president.

Leave a Reply to John B. Cancel reply