Marco Rubio has declared his intent to run for president, so it’s time for another entry in the 2016 Candidate Evaluations series, where we examine a candidate’s background, policy history, and explicit statements in an attempt to figure out whether the candidate would actually be any good at being president. Too often, no one bothers to ask these question, focusing instead on electability or likability. Previous entries have included Ted Cruz, Rand Paul, and Hillary Clinton, none of which were able to earn even a tentative endorsement.  Will Rubio do better?

This is Marco Rubio:

Like Ted Cruz and Hillary Clinton, Marco Rubio has an undergraduate political science degree and a law degree, though Rubio didn’t go to Ivy League schools (he went to the University of Florida and the University of Miami). Within three years of graduating from law school, he was elected to the Florida state legislature and has been in public service continuously since then.

Rubio is an interesting character–he seems to have acquired moderate credentials due to his support for immigration reform, but this is an exception, not the rule. The public seems to have forgotten that Rubio originally became a senator in 2010 by challenging incumbent republican Florida Governor Charlie Crist, who had previously decided to give up the governor’s chair for the senate. Crist was remarkably moderate for a republican in 2010, particularly on economic issues–he supported the stimulus package and Obamacare:

Rubio ran as a Tea Party challenger, overtaking Crist in the polls. Crist dropped out of the Republican primary and ran as an independent. Rubio ultimately won the election, and Crist eventually switched parties, accusing the Republican Party of becoming too radicalized (he even wrote a book about it).

In the meantime, Rubio has continually taken the usual array of hard right positions common to Tea Party challengers:

In all of my research on Marco Rubio, I could find only two issues that distinguished him from Ted Cruz:

To put it very bluntly, Marco Rubio only supports policies that help poor and working people when it is very likely that those poor and working people will be the same color he is, and even then he will not go as far as he might. In every other respect, he is a brown Ted Cruz. Obviously he should not be president–I’m not even going to bother writing a bold “conclusion” section for him.

Here’s the much more interesting question: why is Ted Cruz dismissed by most of the media as a radical while Rubio is treated as if he were a compromise candidate? This is a case of pundit centrism. Hard core readers might remember pundit centrism–it comes from an old 2013 post from my “Intellectual Hipsters” series. Pundit centrism is the practice of creating the public perception that the two sides of the political spectrum are mirror images of one another. This means assuming that the American political center is truly in the middle of the distribution of possible political views, such that there is just as much room for reasonableness and radicalism on the left as there is on the right, and vice versa. In practice, this is not at all how the American political system operates–if you’re a political theorist like me, you know that democrats and republicans combine to occupy a very narrow range of the possible political positions, and all the mainstream American political positions are significantly to the right within the feasible range. Or, as I crudely drew it up in 2012: 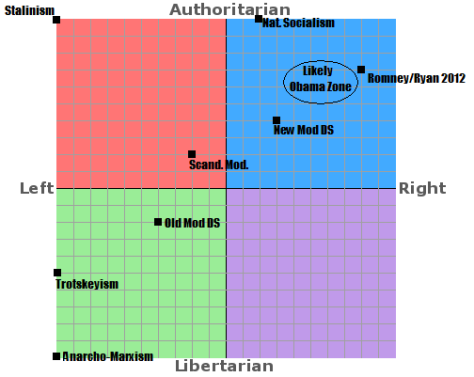 Even new model democratic socialism of the kind currently practiced by contemporary left wing parties in Britain or France is significantly to the right of the Scandinavian Model or the old model democratic socialism of the 60’s and 70’s, and even these are far from the various Marxist ideologies. Democrats like Obama only appear left wing if you are standing to the right of them, at which point all the left wing ideologies appear to converge into one great big horizon, distorting your point of view and allowing you to call Obama a “socialist” or a “communist” without any sense of irony: 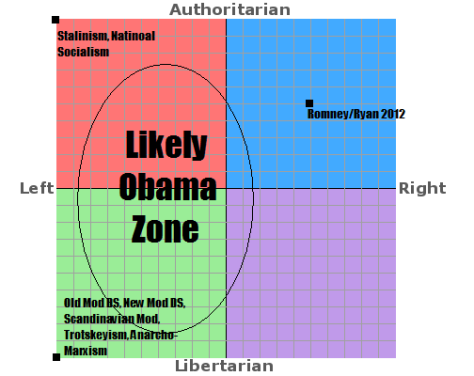 By making Rubio out to be a moderate because he kinda-sorta supports immigration reform, pundits play to the illusion that American politics really covers the entire reasonable spectrum of views. For political theorists or anyone who has lived in Europe, Canada, or Australia for any substantive period of time, this looks utterly ridiculous. Partially defecting from the hard right wing of the party on a single issue does not make Marco Rubio into a genuine centrist. Most Americans have no interest in genuine centrism, which would be significantly to the left of the democrats–even British conservatives at least pay lip service to universal single payer healthcare. Pundits are here to make the election cycle entertaining, to create drama, and this means creating the illusion of a stark and interesting choice among the candidates. This means pretending that because Marco Rubio sympathizes with other brown people a little (and bear in mind, it’s not even that much–if you care about immigration rights (I do), even Hillary Clinton has indicated a higher level of support than Rubio), he’s said to be halfway between Ted Cruz and Barack Obama, dramatically more moderate than the former and a reasonable alternative to the latter. 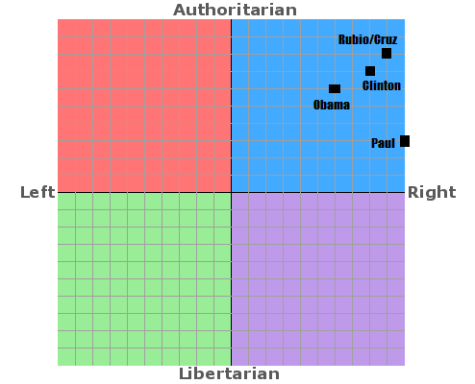 So if you want something radically different, this is the wrong political system for you.