What Social Conservatives Get Right about Liberalism

Many social liberals often speak of a desire to “get the state out of the bedroom”. We often hear them say “I’m not pro-abortion, I’m pro-choice”. They are often perplexed that social conservatives do not seem to want freedom of choice in these matters. Social liberals conceive of themselves as politically neutral, taking no side in the question of whether or not any given individual should get an abortion or have a gay marriage. This neutrality is entirely lost on social conservatives, for whom the liberal position is necessarily affirming abortion and homosexuality as good things. While I agree with social liberals on many substantive issues (I support gay marriage and abortion rights), it’s important to note that in one respect social conservatives are completely correct–the liberal position is not and cannot be a neutral position. Here’s why.

Let’s consider an issue like gay marriage. For social liberals, there appear to be three possible views about gay marriage, each of which is an entirely independent view:

For liberals, the view that gay marriage is permissible is the neutral move, the move that gets the state out of the bedroom. Many liberals believe that conservatives keep straw manning them, acting as if they were really proposing the ridiculous view that everyone should be gay, and a small minority of conservatives actually do this, claiming that there is some kind of nefarious “gay agenda” at work.

But when most social conservatives consider the issue of gay marriage, they don’t see two or three discrete independent views. Instead, they see a continuum, and it looks something like this: 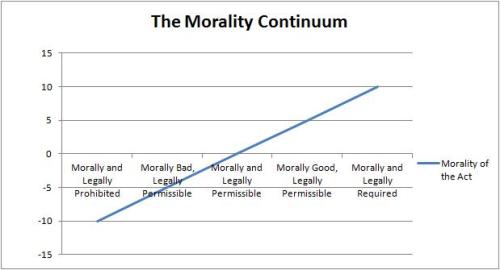 There are 5 places one can be on the continuum, but these are not distinct independent views. Instead, they are relative positions on a sliding scale. Let’s say a little about each one.

Something is morally bad but legally permissible for one or both of two reasons:

Something is morally bad but legally permissible for one of two reasons:

Something is morally good but legally permissible when making it required would be too demanding. It’s good to give money to charity or to help little old ladies cross the street, but if everyone had to give all of their money to charity and help every little old lady cross the street for fear of punishment by the state, that would be an unreasonable demand. Moral philosophers actually have a term for good things that are permissible but not required–they call them “supererogatory“.

On this view, the state cannot take a neutral position or avoid having a substantive view.  Even if the state chooses to take no action to encourage or discourage gay marriage, the implication is that the state thinks that gay marriage is either a matter of taste or situationally complex. If you’re a religious conservative, this means that the state takes a view of gay marriage that directly contradicts your religious belief that gay marriage is unambiguously bad. For religious conservatives, this amounts to a legal rejection of the moral views of their religion–they see it as persecution, as a declaration by their state that their faith is wrong.

Social conservatives have this much right–the liberal claim to neutrality is a front for a policy that in reality promotes a substantive view that is, in effect, an official repudiation of the religious view that gay marriage and abortion are unambiguously bad. The problem is that once we recognize that the liberal position is not neutral but is instead a substantive challenge to the conservative moral worldview, the state is left with nowhere to go if it wants to stake out a position that can be seen by both liberals and conservatives as mutually inclusive. In sum, the state is not in the bedroom because it wants to be there, it’s in the bedroom because the door is locked and it cannot get out. If the government could find a policy that would not contradict the views of either group–that would truly be neutral–it would be immensely politically advantageous for any given political party or politician to embrace that view. No one does so because such a view cannot exist. The state has to choose–does it think that gay marriage, abortion, and other such things are unambiguously bad, unambiguously good, or permissible because of logistical nightmares, situational complexity, matters of taste, or demandingness issues?

I support gay marriage not because I think that this answer allows the state to avoid answering the question of whether or not gay marriage is good, but because I think sexuality is a matter of taste (except in scenarios where there is some kind of severe under-population problem). I support abortion rights because I think it is unambiguously bad to bring unwanted children into the world, and unless the state becomes capable of rearing orphans adequately, parents are the most capable of determining whether or not a child will be wanted. These are substantive views that directly challenge those of social conservatives. They are not neutral answers.

A conventional liberal might say “well, I believe in abortion rights because I believe it’s a woman’s right to choose,”  or “I believe in abortion rights because we have bodily sovereignty,” but these are non-answers. It’s a tautology to say that you believe in abortion rights because you believe that women have them, and to appeal to bodily sovereignty just begs the question–why do you believe that people have or should have bodily sovereignty? “Because it’s good,” is no answer–what is good about it? Inevitably, one is forced to appeal to some outcome–abortion rights and gay marriage rights must confer discrete benefits on those who would avail themselves of these rights. The belief that these benefits do or  can outweigh the various objections and concerns raised by social conservatives is a substantive belief that repudiates the conservative view. There is nothing neutral about it. The effort to get the state to have the liberal position on gay marriage and abortion is every bit as much an effort to capture the state for moral purposes as is the effort to get the state to have the conservative position. To argue otherwise is gross hypocrisy.

So let’s drop the act. Everyone is trying to impose a moral view on society of some kind or other, and whatever the state does it inevitably embraces some ideological and/or religious views at the expense of others. There is no non-coercive option–the only question is who will do the coercing, who will be coerced, and to what end. Power and morality are games that no person can refuse to play.

13 Comments to “What Social Conservatives Get Right about Liberalism”