American Voters are Completely Out of Touch With Economic Experts

I recently ran across a remarkable survey of prominent US economists on the American Recovery and Reinvestment Act, the stimulus package Obama passed at the beginning of his presidency. The results are striking for two reasons–they show a clear consensus among economists that the stimulus was a success, and they completely contradict popular opinion.

The Imitative on Global Markets (IGM) surveyed 44 prominent economists from MIT, Harvard, Yale, Berkeley, Stanford, Chicago, and Princeton. The IGM asked its panel whether they agreed or disagreed with the following statement:

Taking into account all of the ARRA’s economic consequences–including the economic costs of raising taxes to pay for the spending, its effects on future spending, and any other likely future effects–the benefits of the stimulus will end up exceeding its costs.

Here are their results: 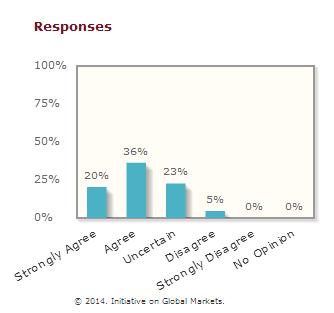 Only 5% disagreed, and none strongly disagreed. The ratio of those strongly agreeing or agreeing to those disagreeing is 25 to 2.  This consensus is even stronger than it was when the IGM previously asked the same question to its panel in 2012.

But is this consensus recognized by American voters? Hardly–at the time the stimulus passed, most Americans thought that in the long-run, the stimulus would have no effect or a negative one:

Among republicans, only 8% predicted that the stimulus would be viewed as a net gain:

By April 2010, a full 62% of Americans denied that the stimulus had even succeeded in creating jobs in the short-term:

Interestingly, the IGM asked its panel if it agreed with another statement concerning the stimulus:

Because of the American Recovery and Reinvestment Act of 2009, the U.S. unemployment rate was lower at the end of 2010 than it would have been without the stimulus bill.

Here the consensus was even stronger: 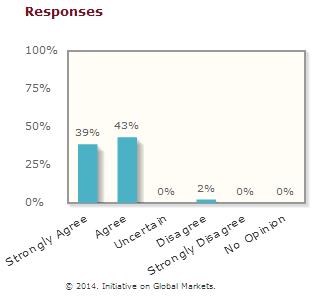 Republicans in 2012 remained stunningly far from the expert consensus view:

Though the figures did improve if the pollsters pointed out to voters that the stimulus included aid to state governments and infrastructure funding, a majority of republicans still considered it “mostly bad“:

In the 2012 election, nearly half the country voted for Mitt Romney and the republicans maintained a house majority. There has been no follow up stimulus package. On the contrary, since the 2010 midterm election, congress has focused on making spending cuts, and federal spending adjusted for population and GDP growth has fallen sharply:

Correspondingly, we see that the employment-population ratio, the percentage of the population currently in employment, has not really recovered since the recession. A significant portion of working age people have simply never returned to work: Many of these people have dropped out of the unemployment figures because they are no longer actively seeking work, often because they have become discouraged and/or have acquired disability benefits. We call these the “long-term” unemployed.

It is quite likely that republicans will retain control of the house in the 2014 elections, and may even regain control of the senate. There they will continue to push for reductions in spending despite the consensus among economists that this harms the recovery.

There is a total disconnect between researched economic opinion and the opinions of both voters and politicians. It is not reasonable to expect voters themselves to be experts on economic matters, but if voters do not even appear capable of informing themselves as to what expert opinion is. The politicians, pundits, and journalists that inform the public about political matters either themselves are in the dark or willfully suppress this information for political gain. Which is it? I follow Hanlon’s Razor:

Most of our politicians, pundits, and journalists themselves lack substantive formal training in economics, political economy, or anything else related. Voters, politicians, and pundits form something of a negative feedback loop. None of the players has the expertise to know what is going on, so all players reinforce one another’s misconceptions. The writings of the economists themselves are too inaccessible for lay people to readily read or report on, and what pieces that do get written spreading this information are often too dry to attract significant reader interest.

The issue that is most analogous? Climate change–97% of climate scientists agree that warming trends over the last half-century are due to human behavior, yet climate change is a low priority issue among voters and most do not believe that warming is human-caused. As with the economy, voters’ inability to recognize and trust expert opinion on climate science damages the prospects for constructive political action. When it comes to the economy and the climate, voters are too conceited about their own level of expertise. They suffer from what is called the Dunning-Kruger effect, in which unskilled individuals systematically overrate themselves due to their deep ignorance of what it means to be competent in a given field. Sadly, because our political system relies on large numbers of lay people to successfully identify and vote for skilled leaders, it is extraordinarily susceptible to this phenomenon, particularly when confronting issues that are counter-intuitive and require significant expertise to master. When the Dunning-Kruger effect happens in a democracy on a mass scale, the perpetrators are also the ultimate victims–the citizens themselves.